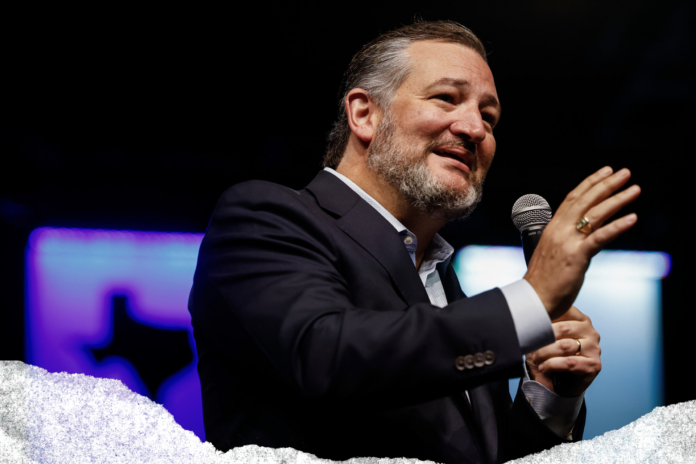 To the sound of Rocky’s Theme Song Gonna Fly Now, Senator Ted Cruz was nicely greeted by the conservative crowd at a GOP convention for speaking in favor of the Second Amendment and to look down on the responsibilization of guns for the mass shootings that continue to happen in the country.

While his colleague, Senator John Cornyn, was booed at the same event during his speech on Friday, Cruz was received with cheers and applause. The only difference is that Cornyn was ever so slightly pointing at a type of regulation for guns, something not tolerated at all by the most radical members of the party.

GOP members and politicians constantly walk a tightrope: they must prove they are the most conservative they can be at all times. A single comment or different opinion, or agreeing even partially with anything said by the other party could end up badly.

The clearest example is George P. Bush: since his family has had issues with Donald Trump, he is no longer seen as a true republican, cataloged as a RINO (Republican In Name Only). It seems like Conryn’s speech on Friday could send him to a similar territory.

In reality, Cornyn isn’t even against guns or the Second Amendment. He just stated that he thought children should not go to school afraid to be shot to death at any point and that there should be measures to stop mentally ill or unstable people from buying guns. After all, Texas’s current gun laws allowed the Uvalde shooter to buy two assault rifles legally on his 18th birthday.

“I will not, under any circumstances, support new restrictions for law-abiding gun owners,” Cornyn said. “That will always be my red line. And despite what some of you may have heard, the framework that we are working on is consistent with that red line.”

Even when he insisted he was not allowing President Biden to make any changes for gun owners, the crowd still shouted things like “No red flags,” “Don’t take our guns” and “stop”, along with booing.

When Senator Ted Cruz took the stage, everyone was delighted by his words. He is one of the few who attended the National Rifle Association convention in Houston mere days after a young adult ended the lives of 19 kids and 2 teachers with legally bought guns.

He refuses to acknowledge the correlation between loose gun regulations and the violence lived in American schools and public spaces. This seems to be the right tactic to remain among the most radical GOP members.

“The response from the Democrats is to go out and try to take away the Second Amendment rights of law-abiding citizens,” Cruz said regarding the response of the Democratic Party after mass shootings. “It doesn’t work. It doesn’t make people safer and it is contrary to the Constitution.”

While Cornyn was sweating, attempting to get on the good side of the crowd, Cruz laughed and cracked jokes about Democrats with no care in the world, and called out “numbskulls” in the media who criticize him.

Apart from making fun of those who want to regulate guns in the country, he also congratulated the new prominent red wave appearing in Latino communities and Latino-dominated states and counties. He claimed that the GOP will take the three districts they are targeting to flip the House red. According to him, that would send Speaker of the House Nancy Pelosi packing.

“Every single dumbass thing that comes out of this White House,” Cruz continued, “part of me grieves. But part of me quietly celebrates, because it is accelerating the process of … bringing this country back.”

He also congratulated South Texas Republican congressional candidate Cassy Garcia, calling her a rockstar and bound to win the next elections, one of the steps to turn the House around, bright red.

Lieutenant Gov. Dan Patrick also made an appearance and agreed with all of Ted Cruz’s points. He even mentioned the Democratic candidate for Governor of Texas, Beto O’Rourke, who is very pro-regulation of guns.

Even though Ted Cruz and Patrick are generally criticized by the media for their insensitive remarks regarding gun violence, this line of thinking still works for sympathizers of their party. If they dare stray from the narrative, they could lose their platform.

Republicans stand tall with their affirmations: they will do everything in their power to keep their guns safe and sound, even at the expense of elementary school children who die due to said guns.