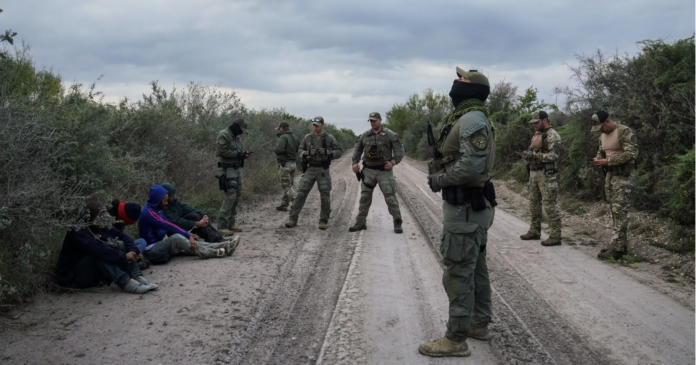 Gov. Greg Abbott on Thursday cleared state authorities to return migrants they apprehend to the border, setting up a potential clash with the federal government.

Immigration law enforcement is a federal responsibility. Abbott appears to be testing the limits of state authority by empowering state law enforcement to bring migrants to the ports of entry — stopping short of using state resources to expel migrants from the country.

In recent months, Abbott has faced growing pressure from within his party to assert a stronger state role and invoke “invasion” powers under the U.S. Constitution. Such a declaration, some Texas Republicans contend, would give states solid legal ground to invoke war powers to send the state’s National Guard to its border to deport migrants. The idea has been widely derided by legal experts as a political ploy, and Abbott earlier this year expressed concern that it could expose state law enforcement to federal prosecution.

The executive order that Abbott issued Thursday allows the Texas National Guard and Texas Department of Public Safety to apprehend “immigrants who cross the border between ports of entry or commit other violations of federal law, and to return” them to ports of entry.

“While President Biden refuses to do his job and enforce the immigration laws enacted by Congress, the State of Texas is once again stepping up and taking unprecedented action to protect Americans and secure our southern border,” Abbott said in a statement.

Abbott’s executive order does not explicitly declare an “invasion” but makes reference to the relevant part of the U.S. Constitution.The executive order says Biden’s “failure to faithfully execute the immigration laws enacted by Congress confirms” he has abandoned his constitutional duty to protect the state against an “invasion.”

On Tuesday, a group of county leaders in South Texas called on Abbott to declare an “invasion” and begin putting state resources toward expelling migrants. The same day, Lt. Gov. Dan Patrick echoed such calls.

“If we’re being invaded under the Constitution, I think that gives us the power to put hands on people and send them back,” Patrick said on Fox News.

Abbott’s executive order was not enough to satisfy one of the loudest advocates for him to declare an “invasion,” the Center for Renewing America. Two officials with the think tank, Russ Vought and Ken Cuccinelli, issued a statement noting that Abbott “does not appear to formally declare an invasion not direct [state law enforcement] to remove illegals across the border directly to Mexico.”

“That is critical,” they said. “Otherwise this is still catch and release.”