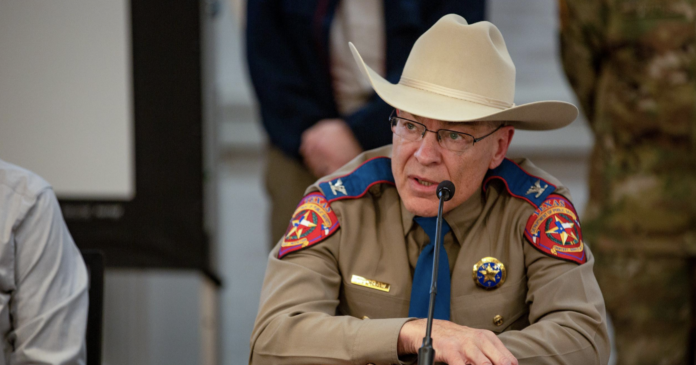 As the state’s top law enforcement agency faces increased scrutiny over its role in the botched police response to the mass school shooting in Uvalde in May, agency director Steve McCraw told USA Today he wishes state troopers had seized control of the operation.

McCraw, who sat down with the news outlet for an extended interview that was published Sunday, has largely blamed local police for failing to act promptly to stop the shooter. The Texas Department of Public Safety director has previously told lawmakers that he did not think it was feasible for troopers to have assumed command, but when asked by USA Today why his agency didn’t take over the reins of the police response, McCraw said, “I wish we would have.”

Law enforcement waited more than an hour to confront the gunman who killed 21 people at Robb Elementary School on May 24, contrary to active-shooter training that teaches officers to take down a shooter as soon as possible.

Of the 376 officers who descended upon the school, 91 were state police. The state agency has taken a lead role in previous tragedies, including the 2013 fertilizer plant explosion in West and the 2018 shooting at Santa Fe High School.

An investigation by The Texas Tribune and ProPublica found that McCraw and DPS have largely avoided scrutiny and deflected blame over the agency’s response to the shooting, in part by controlling which records are released and shaping a narrative that has cast local police as incompetent. The state agency has declined to answer questions from the Tribune and ProPublica for three months.

On Tuesday, DPS announced it would formally investigate five troopers for their conduct during the shooting and said two of them were suspended with pay. DPS told USA Today on Friday that two more officers were under investigation. Two of the seven troopers being investigated are command staff, the news outlet reported.

McCraw also gave more details about DPS’ actions the day of the shooting. When McCraw learned about the shooting, he said he ordered Victor Escalon, the DPS regional director for South Texas, to head to the scene. McCraw has previously declined to answer how he communicated with Escalon, whose chaotic press conference two days after the shooting first raised questions about the conflicting information officials had shared about the law enforcement response. McCraw has recently asserted that Escalon is not going to be fired and that Escalon’s actions that day were appropriate.

In addition, McCraw told USA Today the agency’s first captain wasn’t on scene until 12:25 p.m., about an hour into the standoff. But records reviewed by the Tribune show a DPS special agent arrived around 20 minutes after the shooting started.

In the aftermath of the shooting, McCraw has deflected blame for the unorganized and delayed police response to Pete Arredondo, the Uvalde schools police chief who was fired last month. McCraw said during a Senate testimony in June that Arredondo was the only obstacle between armed police and the 18-year-old shooter.

But McCraw recently told CNN he’ll resign if inquiries into the shooting conclude that troopers had “any culpability” in the delayed response.

In an internal email to DPS employees in June, McCraw said every responding agency shared responsibility in the failures during the shooting. DPS training would be updated to provide proper guidance to recognize and overcome poor leadership decisions during active-shooter emergencies, the email said.

In the minutes from a state police captains meeting in mid-August, McCraw is quoted as saying “no one is going to lose their jobs” based on the response to the shooting, and that all the leaders in the region “did what they were supposed to do and have stepped up to meet the moment.” McCraw recently told CNN he was misquoted and that his comments were referring only to Escalon, the DPS regional director.

This article originally appeared in The Texas Tribune at https://www.texastribune.org/2022/09/11/uvalde-shooting-texas-dps-steve-mccraw/.