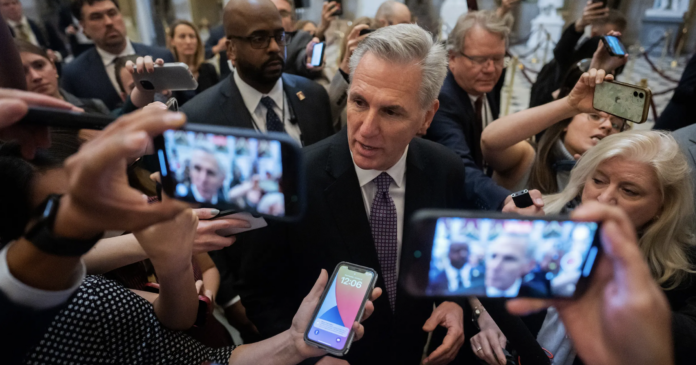 WASHINGTON — Texans are slated to chair some of the most influential committees in this congressional session. But without a speaker of the House, they can’t take their gavels. And it’s getting on their nerves.

“Everything flows from the speaker being elected. We can’t even get sworn in. I can’t start my committee. We’re held hostage until we get this thing resolved,” said Rep. Michael McCaul, R-Austin, who is slated to lead the House Foreign Affairs Committee and lead the party’s investigations into the Biden administration’s botched withdrawal from Afghanistan.

The House recessed Wednesday after yet another series of votes that failed to deliver a House speaker. Roughly 20 of the most hard-line Republican members — including Texas’ Reps. Chip Roy, R-Austin, and Michael Cloud, R-Victoria, and Rep.-elect Keith Self, R-McKinney — held firm in their opposition to a bid by Rep. Kevin McCarthy of California for the speakership, meaning no candidate was able to secure the 218 votes needed to secure the gavel.

Normally, committee assignments would be determined by early December, allowing members to hire staff and set up the structures needed to immediately start legislating. Republican party leadership plays a central role in selecting who will lead each committee.

But that process was delayed late last year after it became clear that this year’s speaker’s election would be competitive. The House Republican conference was unable to get enough of their members behind McCarthy in a November party meeting to secure his majority in the full chamber, leaving too much uncertainty for the party to start doling out chairmanships.

That’s put several Texans in limbo. Rep. Dan Crenshaw, R-Houston, is competing against two other Republicans, Reps. Mark Green, R-Tennessee, and Clay Higgins, R-Louisiana, to lead the Homeland Security Committee, which will be key to the party’s oversight agenda of the Biden administration’s immigration policy. Rep. Jodey Arrington, R-Lubbock, is also gunning for the top spot on the House Budget Committee.

“Rules changes, who gets more power, who gets on what committee — I can’t think of one American who gives a damn about any of that,” Crenshaw told reporters. “They care about the mission. And the conservative agenda is one that will accomplish the mission for the American people the best. But we can’t start that agenda until we start governing.”

Other Texans slated to lead committees include Rep. Kay Granger, who is set to chair the House Appropriations Committee, and Rep. Roger Williams, who is running uncontested to lead the Small Business Committee.

It isn’t only impacting members. Without chairs, the support mechanisms for committees can’t be created or funded. Members can’t access the secure areas used to process sensitive information. Crenshaw planned to double the size of the Homeland Security committee but is unable to hire personnel. It’s taking a toll on the morale of staffers, who are the ones who comb through arcane numbers and legal jargon to put ideas into bill text.

“You have to have your committees in order. That’s how you do the work of Congress, the work of the people,” Williams said.

The right-wing members say they oppose McCarthy as part of their broader protest against the way the House is run, demanding drastic alterations to House procedure. The rules of the chamber, they say, puts far too much power in the hands of leadership and committee heads at the expense of rank-and-file members. They demand sweeping rules changes and seats for some of their allies in prime committees in order to give more power to a wider range of members within the party.

McCarthy has already acquiesced on many of the rules changes, but he and his allies argue the opposition has devolved into a personal beef and those members trying to secure plum committee assignments for themselves.

“You tell me what you need. I’ll beg McCarthy for it. Like what is it? And they won’t tell me,” Crenshaw said in an interview with the Tribune. “You guys got a lot of stuff. A lot of concessions that a lot of us are actually really uncomfortable with.”

McCarthy himself asked dissenters what they wanted during a Republican conference meeting Tuesday, McCaul said, but they were not able to give specifics.

Roy and Cloud retort that there is nothing personal about their position and that the concessions from leadership were not sincere. Cloud said in a statement Tuesday the rules proposals by McCarthy’s camp “lacked enforcement mechanisms necessary to ensure their implementation, casting doubt on the sincerity of reforms.”

Roy pushed back on the idea that dissenters were trying to force themselves onto powerful committees out of self interest. In an interview with Dana Loesch, Roy said he didn’t want to be on the House Rules Committee on account of the added time commitment that would detract from his time as a parent. But he put his name down to join the committee “because I’m trying to save the damn country.”

Roy added that dissenters became even firmer in their positions after the Tuesday conference meeting due to McCarthy’s handling of their demands. Roy was angered by a threat by McCarthy’s allies to pull members off of committees if they didn’t vote for him.

McCarthy and the dissenters have continued to meet on the sidelines of the lengthy roll call votes, which have so far remained essentially stagnant. Roy told reporters Wednesday that the discussions were progressing, and members broke voting Wednesday afternoon to huddle yet again.

After two days and several hours of monotonous roll call votes, members were visibly frustrated and fatigued in the chamber. Members jeered and cackled through calls for order, and several groaned as those not in their camp repeated their talking points. Crenshaw warned resentment would only grow as time went on.

But the dissenters made it clear they were obdurate and didn’t care about personal popularity in face of their principles.

“My constituents sent me here to vote for my district and be strong,” Self said.