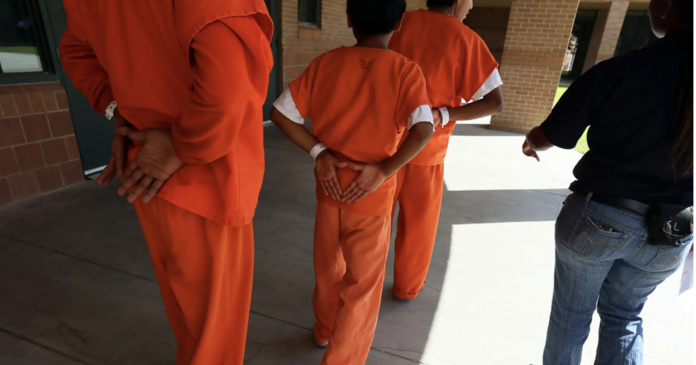 Texas’ juvenile detention system has shut its doors and won’t accept any new kids because it is “hemorrhaging” staff, and officials fear they can’t ensure the safety of the nearly 600 youths already in their custody.

According to a Texas Juvenile Justice Department letter, released to The Texas Tribune on Wednesday, the state’s five youth lockups were implementing emergency protocols “as the staffing strength at each secure facility becomes more grim.”

“The current risk is that the ongoing secure facility staffing issue will lead to an inability to even provide basic supervision for youth locked in their rooms,” Shandra Carter, the agency’s interim director, wrote to juvenile probation leaders across the state last week. “This could cause a significantly impaired ability to intervene in the increasing suicidal behaviors already occurring by youth struggling with the isolative impact of operational room confinement.”

The agency has 331 vacant positions for juvenile corrections officers and only 391 officers available to cover its facilities, an agency spokesperson said Thursday.

Minors sentenced to serve sentences at a TJJD facility will remain at local detention facilities, many of which have their own shortage of beds. In her letter, Carter said 130 juveniles were waiting in county facilities before intake was halted.

Carter said the agency is trying to restart intake as soon as possible by shifting people to different units, stopping intensive intervention programs for those who have committed violent crimes and looking into whether any youths could be eligible for release.

Texas’ juvenile lockups have long been plagued by physical and sexual abuse and dangerous environments for youths detained there. In October, the U.S. Department of Justice announced it was investigating ​​whether the agency provides “reasonable protection from physical and sexual abuse by staff and other residents, excessive use of chemical restraints and excessive use of isolation.”

Carter was appointed to run the agency by the Texas Juvenile Justice Board in April, when former director Camille Cain quit without notice after four years at the helm. Hours before Cain’s departure was made public, Gov. Greg Abbott announced he was taking money from her troubled agency to continue funding Operation Lone Star, his multibillion-dollar border security operation.

Cain, who previously worked for Abbott, has not publicly discussed the reasons for her departure. Records obtained by the Tribune show Cain requested $31,225,360 in coronavirus relief funds from Abbott’s office in April, weeks before the governor took the same amount of money from her agency.

In a statement, TJJD said Thursday that the funds transferred out of their hands by Abbott had a “net-zero” budget impact. A spokesperson said the agency had used federal coronavirus relief funds to pay salaries that would typically have come from their general revenue.

“Once those expenditures from the federal dollars were made, we returned the same amount of funds from our General Revenue,” TJJD spokesperson Barbara Kessler said in the statement.

On Thursday afternoon, an Abbott spokesperson said the transfer of funds only acted as a placeholder and “did not impact the agency’s operational budget in any way.”

“The safety and security of TJJD staff and youth is a top priority for Governor Abbott,” spokesperson Renae Eze said in a statement. “Under Interim Director Carter’s leadership, TJJD is implementing permanent raises to address the urgent issue of understaffing at facilities and ensure they remain secure and safe.”

A month before Abbott announced he was transferring money out of TJJD to fund Operation Lone Star, Carter, then TJJD’s deputy executive director for state services, told an advisory council that the youth lockups were over capacity in terms of staff-to-youth ratio.

Only one facility was taking new detainees, she said, according to the meeting minutes. Others were often unable to provide educational or therapeutic programming, and they were regularly in lockdown because of staffing shortages. In December, she said, staff assessed youth for suicide concerns 1,000 times.

In recent years, Texas counties and cities have sent fewer and fewer minors to TJJD, instead holding them close to home or sentencing them to probation. In May, fewer than 600 youths were being held at TJJD’s secure facilities, according to a state report, a number which has dropped significantly in the last decade.

For advocates who have pushed to close state-run youth lockups, the staffing crisis only points to the need for a new approach to juvenile justice. Advocates have long requested counties handle the youth justice system, and hope the ongoing staffing crisis in a time with fewer youth in lockups will push the state to rethink the system when the agency goes under legislative review next year.

“We already had a backlog of services … they didn’t have enough people to provide the therapy [youth] needed,” said Brett Merfish, director of youth justice at Texas Appleseed. “How extreme does it have to be to say, ‘OK, we have to do something different’?”

Disclosure: Texas Appleseed has been a financial supporter of The Texas Tribune, a nonprofit, nonpartisan news organization that is funded in part by donations from members, foundations and corporate sponsors. Financial supporters play no role in the Tribune’s journalism. Find a complete list of them here.