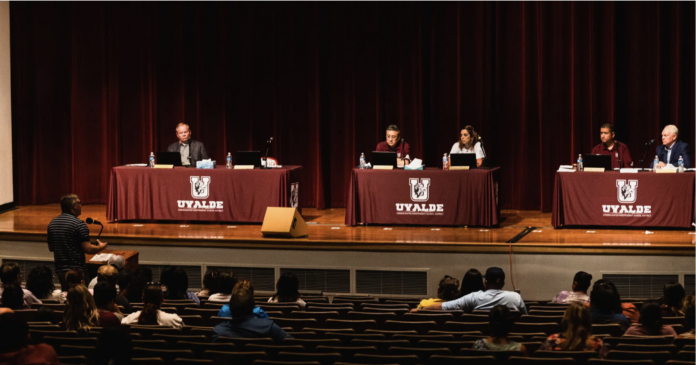 The Uvalde school board is formally urging Gov. Greg Abbott to call state lawmakers back to Austin so they can raise the legal age to buy assault rifles from 18 to 21, more than two months after a gunman used such a weapon to kill 19 elementary school students and two teachers days after he turned 18.

Uvalde Consolidated Independent School District trustees approved the largely symbolic resolution in a unanimous vote on the same night they voted to delay the start of the school year. Trustees moved the first day of school from Aug. 15 to Sept. 6 so that more security improvements can be made to campuses and district staffers can receive trauma-informed training.

Uvalde County commissioners have also asked Abbott, who in June asked the Texas Legislature to form special committees to make recommendations in the aftermath of the shooting, to call a special session to increase the legal age to buy an assault rifle. Democrats have made similar calls since the May 24 shooting at Uvalde’s Robb Elementary. The governor is the only Texas official with the power to call special legislative sessions.

In an emailed response to The Texas Tribune, a spokesperson from Abbott’s office said the governor “has taken immediate action to address all aspects” of the massacre in Uvalde.

“As Governor Abbott has said from day one, all options remain on the table as he continues working with state and local leaders to prevent future tragedies and deploy all available resources to support the Uvalde community as they heal,” the spokesperson said. “More announcements are expected in the coming days and weeks as the legislature deliberates proposed solutions.”

The vote on both items comes more than a week after a Texas House report detailed a series of “systemic failures” that allowed for the gunman to enter Robb Elementary in Uvalde and remain inside two adjoined classrooms for more than 73 minutes before law enforcement confronted him. Nearly 400 officers from numerous agencies responded to the campus that day. At least a year before the shooting, the gunman had threatened women, carried around a dead cat and been nicknamed “school shooter,” according to the investigation.

At a school board meeting last week, Uvalde residents called for district officials to fire district police Chief Pete Arredondo, who was among the first officers to arrive at the school the day of the shooting. School board members were scheduled to discuss that Saturday, but the school district postponed the meeting at the request of the police chief’s lawyer.

For weeks, state leaders have said Arredondo was the incident commander and blamed him for law enforcement waiting more than an hour to confront the gunman. Arredondo, who was placed on administrative leave last month, told the Tribune that he did not consider himself the incident commander. The school district’s active-shooter response plan that he co-authored, though, says the chief will “become the person in control of the efforts of all law enforcement and first responders that arrive at the scene.”

The House report explains how the gunman — who also shot and wounded his grandmother, Celia Gonzales, before storming the school — was able to stockpile military-style rifles, accessories and ammunition without arousing suspicion from authorities, then enter a supposedly secure school unimpeded.

The report also revealed that, “while the school had adopted security policies to lock exterior doors and internal classroom doors, there was a regrettable culture of noncompliance by school personnel who frequently propped doors open and deliberately circumvented locks.” In violation of school policy, the report said, three exterior doors to the west building of the school were unlocked on the day of the shooting — one of which the gunman walked through with ease just moments before entering classrooms 111 and 112.

Trustees said Monday that they plan to add extra police officers, install bullet-proof windows, put up metal detectors and create single points of entry for visitors. School officials have also requested that state troopers be on every campus at the beginning of the school year.

Residents at the meeting questioned what additional police officers would accomplish when there were already hundreds who responded to Robb Elementary on the day of the shooting.

“Just remember it’s not about extra security,” one resident said to the school board. “Over 400 officers and 77 minutes later already proved where that got us.”

The House report also concluded that alerts set to reach the phones of school personnel in emergency situations also failed to do so in a timely manner during the shooting because of “low quality internet service, poor mobile phone coverage, and varying habits of mobile phone usage.”

The investigation said frequent “bailout-related” alerts — which come when officers chase a vehicle containing suspected undocumented migrants, who then purposely crash and scatter to avoid apprehension — led teachers and administrators to respond to cautionary messages with less urgency. The predominantly Hispanic city is about 50 miles east of the border with Mexico and sits at the intersection of major highways from the border cities of Del Rio and Eagle Pass.

Abbott, who’s been reluctant to entertain changes to the state’s gun laws, has since called the House committee’s findings “beyond disturbing” and said there are critical changes needed as a result.

This article originally appeared in The Texas Tribune at https://www.texastribune.org/2022/07/25/uvalde-school-board-greg-abbott-legislature/.