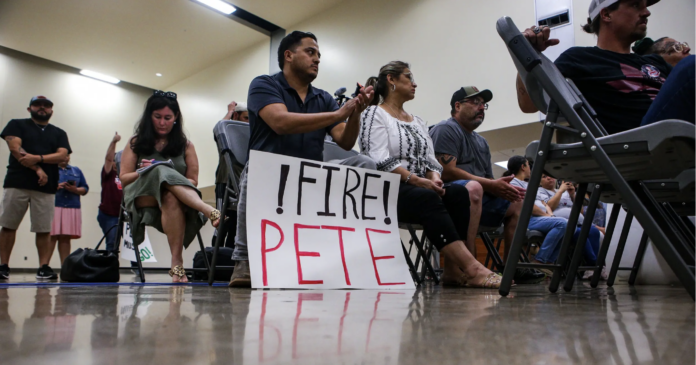 The meeting falls almost two months after Arredondo was among the first law enforcement officers to arrive at the scene of Texas’ worst school shooting.

Blame for the fiercely criticized response to the massacre — during which law enforcement waited more than an hour to confront the shooter — has largely fallen on Arredondo. The district placed him on administrative leave roughly one month after the shooting.

Arredondo was chief of the Uvalde Consolidated Independent School District’s six-person department on May 24, when an 18-year-old gunman entered Robb Elementary and killed 19 children and two teachers. The school district did not immediately respond when asked if Arredondo was notified about the intent to terminate him. Arredondo’s lawyer also did not respond to a request for comment.

Much of Uvalde residents’ anger over the delayed response to the shooting has been directed toward Arredondo. In a school board meeting Monday, residents chastised school officials for not already firing Arredondo. They also criticized officials for what residents saw as slow attempts to improve campus safety.

Arredondo’s actions at the scene were also criticized in a Texas House committee report released Sunday, though the report also points to the failure of other agencies to respond appropriately. Arredondo was among 376 law enforcement officers from local, state and federal agencies on the scene. The responding officers, though, lacked clear leadership, basic communications and sufficient urgency to take down the gunman, the report states.

The consensus of those interviewed by the House committee was that either Arredondo — or no one — was in charge at the scene, which several witnesses described as chaotic.

In an interview with The Texas Tribune, Arredondo said he did not think he was the incident commander on the scene. Yet according to the school district’s active-shooter response plan, authored in part by Arredondo, the district chief would “become the person in control of the efforts of all law enforcement and first responders that arrive at the scene.”

Arredondo testified that he believed the shooter was a “barricaded subject” instead of an “active shooter” after seeing an empty classroom next to the one where the shooter was when the gunman had already fired off more than 100 rounds in less than three minutes.

“With the benefit of hindsight, we now know this was a terrible, tragic mistake,” the House report stated.

Despite Arredondo’s eventual understanding that there were likely injuries and fatalities in the classroom with the gunman, the barricaded-subject approach did not change throughout the incident, the report adds. In the event of an active-shooter incident, training directs law enforcement responders to prioritize the lives of innocent victims over those of officers.

The report criticized Arredondo’s focus on trying to find a key to open the door to the room the shooter was in, which “consumed his attention and wasted precious time, delaying the breach of the classrooms.” The report acknowledged that it is unclear whether Arredondo would have acted differently to respond with more urgency if he learned of surviving, injured victims.

In addition to serving as the school district’s police chief, Arredondo was elected to Uvalde’s City Council a few weeks before the shooting. But he wasn’t sworn in until after the massacre. After missing several meetings, Arredondo stepped down from his District 3 seat to “minimize further distractions.”

Brian Lopez and Sneha Dey contributed to this story.