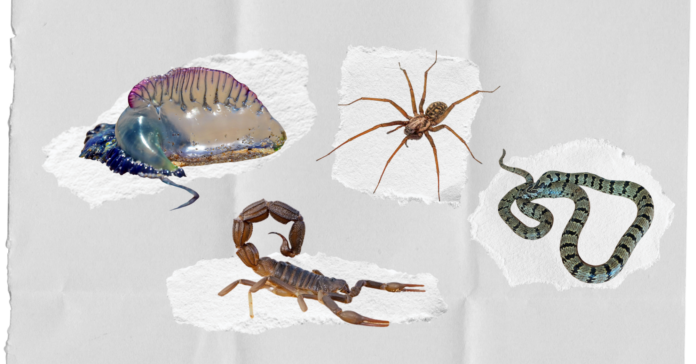 Texas is home to an array of animal species, including those who use venom to defend themselves or to catch their prey. Some can cause a little itch in the leg, while others can cause death.

This is a list of 8 species of animals and plants present in the Lone Star State, that can be found in your own backyard or encountered while on a beach day.

These animals may not bite or sting, but they do release a fluid called cantharidin, which causes blisters on the skin. They are known to be very dangerous if ingested, and there have been cases of horses who died after accidentally eating them.

If swallowed by humans, there will be swelling of the lips, mouth, and throat, along with difficulty swallowing, abdominal pain, vomiting, and blood in the urine. Severe effects include kidney damage and shock. When the eyes are exposed, the result can be pain, tearing, decreased vision, and damage to the cornea.

This very well-known plant can grow in different shapes, sizes, and colors. Its most distinguishable characteristic is having three leaflets on each stalk.

What makes the poison ivy toxic is an oily substance called urushiol, which forms in the sap and is present all throughout the plant. The poison affects people differently, but usually, it comes with itchy bumps and blisters, and in worse cases, it may need medical treatment due to the inflammation of internal organs.

Although most spider species aren’t deadly, all of them have venom, since that is how they are able to catch their prey. They will only bite a human if they feel like their home, their eggs or themselves are being threatened.

Most bites are insignificant and require little to no medical attention, with the exception of the bites of widow and recluse spiders. The neurotoxin in their venom can cause fever, chills, and weakness within one to 48 hours.

Texas, being the dry and desert-filled state it is, is home to many different species of snakes. Some venomous snakes in South Texas alone include cottonmouth water moccasins, copperheads, coral snakes, and rattlesnakes. All but coral snakes are vipers. This means they have retractable fangs that can pierce the skin and deposit venom.

One to two people die in Texas each year due to a snake bite, according to the Texas Department of State Health Services. If bitten by a snake, the symptoms can include blurred vision, fever, muscle contractions, vomiting, and rapid pulse rate.

This pretty plant is poisonous in all of its parts, but the most concentrated and dangerous part is the seeds. There have been cases of humans who died of ingesting the plant, including ancient philosopher Socrates.

If someone accidentally consumes the plant, it results in central nervous system depression, respiratory failure, acute rhabdomyolysis (breakdown of muscle tissue), acute renal failure, and even death. Other effects include burning in the mouth, increased salivation, trembling hands, and walking imbalance.

Even if it is extremely deadly if swallowed on its own, it can also be used to make medicine. It can cure things like bronchitis, whooping cough, and asthma.

Texas has different types of centipedes, the one that can be dangerous is the Texas red centipede. It has 23 legs and is able to grow 8 inches in the wild and is shown to grow even more in captivity.

If a Texas red centipede is able to bite you with its big strong pair of pincers, the result is intense, scorpion-like pain. The bites also cause swelling that goes away after a few hours. In some cases, it can also cause dizziness, headaches, and nausea.

This weird underwater creature is very similar in appearance to a jellyfish. They are also alike due to the fact that their sting can cause swelling and pain. Unlike jellyfish, though, their stings can be fatal.

You can spot it floating on top of the seawater. They cannot move on their own and completely rely on the water current. A sting can cause paralysis, breathing problems, and permanent purple lines where the skin got stung.

These creatures are regularly pretty relaxed and don’t actively look to hurt humans. But if you step on one, it will swat you with its tail, piercing you and releasing its poison onto the skin. Effects include feeling extremely tired, a drop in blood pressure, rapid heartbeats, chills and paralysis.