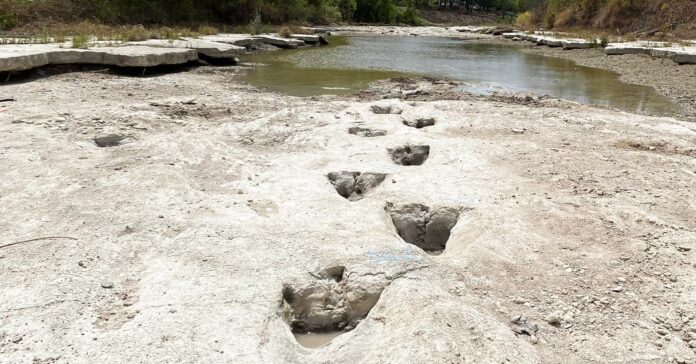 Several dinosaur tracks were discovered at a natural park in Northern Texas. These tracks became visible because of the intense drought the state is experiencing. The park superintendent Jeff Davis, told USA Today that: “either haven’t been seen for decades, or you know, that maybe haven’t been seen anybody in anyone’s living memory. So that is what makes it kind of special, what’s going on right now.”

The area where this discovery was made is located inside the Dinosaur Valley State Park, a place where there have been hundreds of discoveries of dinosaurs and prehistoric animals as far back as 113 million years ago. The specific place where these tracks are used to be underwater, covered by the Paluxy River, but since the river has receded the tracks became visible. And the tracks are not solely from one dinosaur.

According to the park superintendent: “The tracks found include a series made by a dinosaur with tracks often found in the park: an acrocanthosaurus, a theropod (dinosaur that walked on two legs) and a predator similar in size — 20 feet tall or more and weighing as much as 7 tons — to the Tyrannosaurus.”