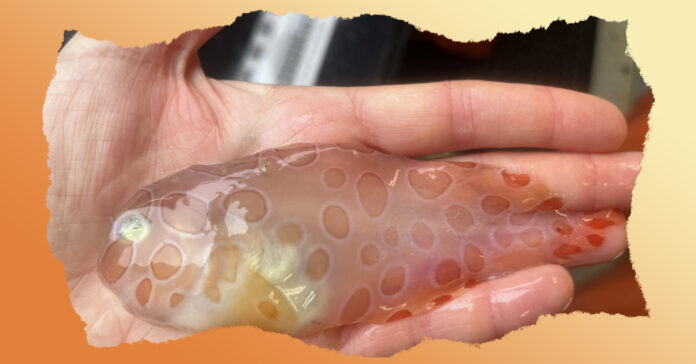 A see-through fish was found by a group of marine biologists in the cold waters of Alaska. Sara Friedman, the fish biologist in charge of the expedition, explained that it is a rarely-seen blotched snailfish.

She shared via Twitter a picture of the peculiar little creature, expressing how rare it is to have seen it.

Friedman is a fish biologist at the National Oceanic and Atmospheric Administration (NOAA), an organization dedicated to the study of the creatures of the deep sea, and is backed up by the U.S. government.

According to an interview by Mashable, Friedman stated that “We found four or five so far, in the couple of weeks we’ve been out”. She and her team encountered the rare fish in one of their routine surveys done by NOAA, conducted yearly on the Aleutian Islands off of Alaska.

These creatures are almost completely transparent, with a reddish hue and tiny dots splattered throughout its body. Its uncommon appearance serves a very simple purpose: to help it camouflage with its surroundings and avoid predators.

The snail fishes use their red hue to their advantage. Since red light has the shortest wavelength, it cannot reach the deep sea levels in which these creatures roam, and end up being almost invisible.

Another cool feature these fish have is the suction cups at the bottom of their bodies. These help them hang on to rocks, especially during strong currents.

The work done by Friedman and NOAA has the purpose of educating the general public on the creatures that inhabit the sea, and to continue to protect them. The annual surveys and cataloging of these ecosystems also help scientists understand how the environment is changing over time.