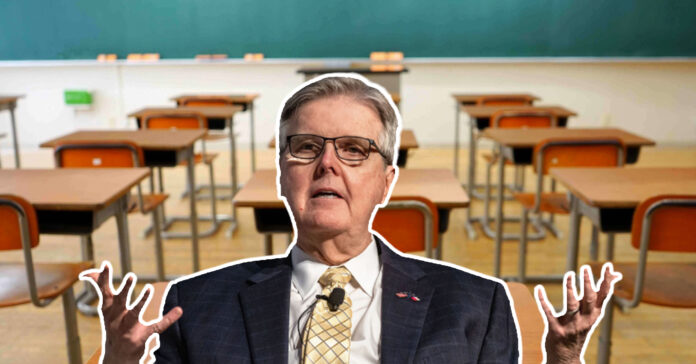 Attacking schools as an institution has become part of the Texas Republican strategy to smother progressivism to death in the state. While the main event is happening in K-12 public schools, Lt. Governor Dan Patrick has made time to fight Texas’ public universities as well.

He’s backing up his threat. In a subsequent press conference, Patrick vowed to make fighting tenure for professors at state universities a top legislative priority. It’s clear from his words that he wants to be able to pressure universities into firing teachers who do not follow conservative ideology in the classrooms.

Tenure is a status at universities that insulates professors from being fired except in very dire circumstances. The position is generally offered to teachers who are also driving important work in their fields. In a wonderful piece in the Houston Chronicle, Chris Tomlinson lays out how tenured professors gave the state everything from the Texas Medical Center to the tech boom in Austin. Experts and researchers with tenure are often insulated from the whims of political creatures like Patrick, something that is clearly a thorn in the lieutenant governor’s side.

If Patrick does manage to press the Texas Senate into doing away with tenure at public schools, the results for the state’s growth will be catastrophic. The draconian abortion law that has gone into effect has already started a brain drain from new tech companies looking to expand into the Lone Star State. Leading minds with their choice of gigs often don’t want to move their families to a state that restricts reproductive rights.

The same will certainly be true of the universities. Experts and researchers who might otherwise have come to Texas will see the lack of tenure and increasing pressure from the state to toe political lines in flagrant denial of scientific reality and go elsewhere. What will be left is a collection of timid blackboard mice who never dare question the state or zealous ideologues only too happy to downplay the horrors of white supremacy in Texas history and other conservative bugaboos.

The Texas Republican leadership has made destroying public education as we know it their primary method of inspiring their political base and browbeating progressivism into submission. Piece by piece, they are trying to dismantle any protection between teachers and the increasingly fascist policies of the Republican-dominated state.

In the meantime, these threats will undoubtedly send people who could be the architects of our future away to less restrictive states who do not feel the need to censor professors merely teaching objective reality despite fragile conservative feelings. Should Patrick get his way, an entire generation in the state will be starving for expertise and innovation. That is apparently a worthy price if it keeps students from ever examining their complicity in an ongoing racist society.