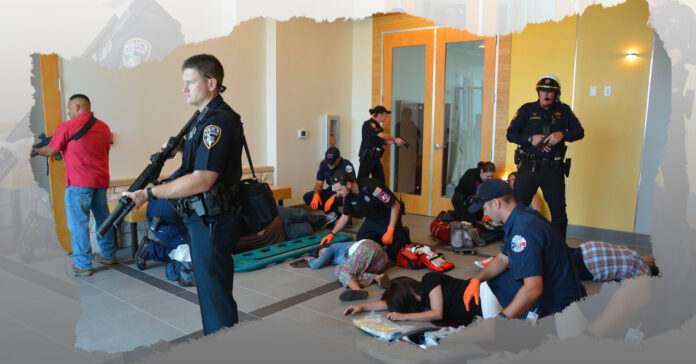 While students are in a back-to-school frenzy, superintendents from Northside and Judson ISD are in a turmoil of their own: the state has failed to help them do anything to prevent tragedies like the Uvalde elementary school shooting that left 19 children and two teachers dead.

In the wake of the Uvalde shooting, the state’s Republican leaders, led by Gov. Greg Abbott, rolled out a plan to spend $100 million on school safety measures, after refusing to call a special session. And yet, the money directed to buy bullet-resistant shields and mental health services hasn’t arrived at several school districts.

During a school safety summit at the University of Texas, Judson Superintendent Jeanette Ball and Northside Superintendent Brian Woods said they had yet to see any of that money.

“I have heard of these funds to buy shields and things like that, but I know that we have not received anything yet,” said Ball.

Woods said that up until the Uvalde shooting, “What we’d heard from leadership at state is, ‘You’ve got more than enough federal money, you don’t need more.’”

During the panel, Ball and Woods were joined by Rep. Diego Bernal, taking turns to call out the Republican-controlled legislature, which they said hurt all their efforts to make schools safer even before Uvalde.

Last year, Judson ISD tried to propose a $302.5 million bond to make improvements aimed at safety and failed thanks to the Legislature, who made it mandatory to add wording on the ballot that says a bond could result in a tax increase.

“The fencing that we needed, the infrastructure for the technology that was needed for cameras, all those things, that was part of our bond,” said Ball.

Next year’s legislative session is right around the corner and school safety has become a top priority for most.

After the tragedy in Uvalde, members of both parties have expressed a desire to use some of the state’s estimated $27 billion surplus to address the safety issue.

However, the Governors’ main focus is directed elsewhere. Abbott has made parental rights a priority for his campaign and has said he supports parents’ “choice to send their children to any public school, charter school or private school with state funding following the student.”

Most recently, in a round at The Kings’ Academy, he said the state should not have the authority to keep children in public school systems where they’re not succeeding.

At the summit, both lawmakers and educators acknowledged that they have very limited leverage to influence policy in a state controlled by Republicans, as reported by San Antonio Report.

“If you don’t like the policies in Austin, you need to vote,” said Woods.