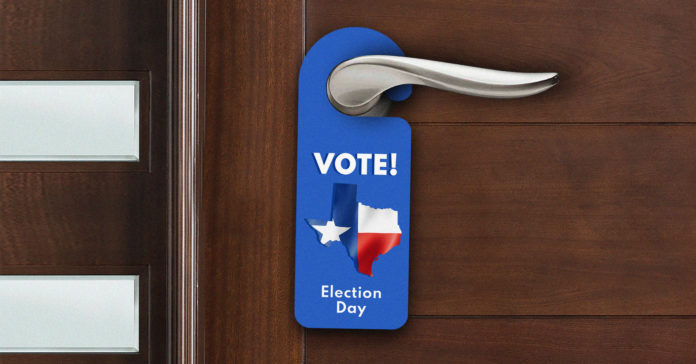 In the final weeks of one of the most divisive election campaigns in recent history, candidates are rushing to deliver their message to voters and to encourage them to cast their ballots.

But in the midst of the pandemic, with new cases and hospitalizations once again increasing in Texas, voter outreach has never been more daunting or complicated.

Texas Republican candidates have been less hesitant to brush off safety risks and hold in-person events, including political rallies, fundraisers and door knocking, according to political observers.

Trump’s coronavirus diagnosis and swift recovery hasn’t broken Republican momentum, with GOP candidates taking cues from the president’s message of “don’t be afraid of it.”

After testing negative for consecutive days and being cleared by his doctor, Trump returned to the campaign trail this week and announced plans to continue to travel and hold rallies until the Nov. 3 election.

But Democrats have taken a more cautious approach, largely avoiding in-person campaigning for safety reasons during the pandemic.

“It would be foolish to say that it does not make a difference to not do door-knocking and in-person campaigning,” said Matt Angle, director of the Lone Star Project, a Democratic research and political support organization. “Democrats have spent the past 10 years working to perfect our process of community outreach and meeting voters in person.

“But this year, Democrats are taking the virus seriously and are respectful of it and of people’s health,” he said. “Our candidates don’t want to expose themselves, their campaign workers, volunteers or voters they come in contact with to it.”

Also taking cues from national candidates such as Democratic Presidential nominee Joe Biden, some statewide and local candidates are starting to do some in-person campaigning while others are striking back at GOP opponents who mock their decision to campaign virtually and through other forms of contactless outreach.

In some cases, candidates’ approach to campaigning during the pandemic has become an issue of the race.

In the high-profile election battle for the open Congressional District 24 seat in the suburbs of Dallas-Fort Worth, Republican Beth Van Duyne and Democrat Candace Valenzuela have locked horns over this issue.

Van Duyne, a former mayor of Irving and Trump ally, has adopted Trump’s narrative of accusing Biden of hiding in his basement to use against her opponent.

“Even Joe Biden, who barely left his basement in months is out campaigning now,” Van Duyne tweeted. “But Candace Valenzuela continues to hide behind her computer screen and refuses to meet people face-to-face where they live, work and make North Texas stronger.”

“North Texans deserve a representative who won’t hide from them and who has the courage to show up,” she said in another tweet. “Public servants don’t have the luxury of calling it in.”

But Valenzuela, a former suburban school board member, lives in a multi-generational home with family members who have health issues. She has held firm on her commitment to virtual events and won’t debate Van Duyne in person, which is what Van Duyne is pushing for.

This race to succeed retiring U.S. Rep. Kenny Marchant has drawn national attention and funding as a bellwether of demographic shifts in Texas’ suburbs. Van Duyne, a conservative who worked as a regional official for the U.S. Department of Housing and Urban Development under the Trump administration, represents the traditional outlook of suburban Republicans. Valenzuela, if elected, would be the first Black Latina to serve in Congress.

But other Democrats have adopted innovative ways to meet with voters or are doing socially distanced in-person canvassing.

In the race for the Congressional District 22 seat, Republican Troy Nehls, the Fort Bend County sheriff, conducted an outdoor campaign rally. Democratic opponent Democrat Sri Kulkarni countered with a rally that allowed voters to attend in their vehicles.

The Texas Organizing Project, which leads community initiatives to lift up Black and Latinx communities in Harris, Dallas and Bexar counties, has been supporting candidates in state house and county races through various means, including in-person canvassing.

“In-person events are more effective overall,” said Crystal Zermeno, director of electoral strategy for the Texas Organizing Project. “For example, our contact rate goes anywhere from 1 to 3% on phones to 18 to 22% on doors.”

The organization regards voter contact via a phone call or text from a known source as the most effective form of voter outreach. Organizers recently began socially distanced canvassing, which has raised voter contact rate to 18%, Zermeno said.

“Safety is our number one priority,” she said. “TOP did not take the decision of door knocking during a pandemic lightly. We consulted with public health experts, other groups doing this work safely, and deliberated with our staff.”

With so much on the line in this election, “it became clear that we are literally in the fight for our lives, and we need to use every tool at our disposal,” Zermeno said.

Democratic State Rep. Julie Johnson of District 115 in Dallas County has employed every form of campaigning, including phoning, texting, virtual events and in-person canvassing to connect with voters.

Some voters are afraid of in-person visits but most have been receptive, she said.

“I’ve had an overwhelming response,” she said. “So many people are isolated, lonely, scared and want to interact with someone.

“It’s been a very good experience for me,” she said.