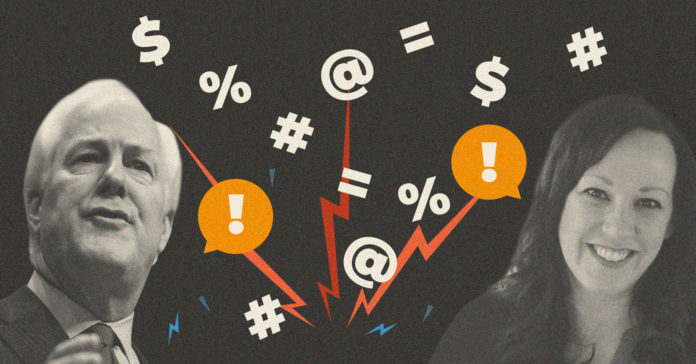 Not only can Democratic challenger MJ Hegar bring in more political donations than incumbent Texas Sen. John Cornyn (R-Houston), she could probably also beat him in a swearing contest. It’s no secret that F-bombs and other salty language can easily roll off Hegar’s tongue on the campaign trail. Cornyn thinks it’s disrespectful and in his latest TV ad uses it as an example of the differences between him and Hegar.

“Here’s the truth, MJ. Texans DO … care… about who represents them, and in these times, they need a leader with a steady hand who treats people with respect,” Cornyn’s campaign tweeted.

But are those differences the reason Cornyn is in the political fight of his life? Hegar thinks so, and she used a few of the expletives that Cornyn is so offended by to make her point.

“FACT CHECK: No Shit, Texans are F*$#ing Pissed Cornyn Has Failed Them,” read the headline on the news release Hegar’s campaign issued in response to Cornyn’s new ad.

Hegar believes Cornyn’s ad makes “it abundantly clear that his 18 years in D.C. have turned him into a soft D.C. politician who is woefully out of touch with real Texans,” especially women.

“You don’t F*$K with Texas women,” Hegar’s news release stated before going on to criticize Cornyn’s job performance. “Texas women are tough as nails and rightfully pissed off that Senator Cornyn has repeatedly failed to stand up and protect their health care and lied about it, refused to keep Texas communities safe from gun violence by passing common-sense gun safety reforms, and spread misinformation about the COVID-19 pandemic while failing to provide relief.”

Hegar raised $3.7 million in the first two weeks of October, compared with Cornyn’s $1.3 million. She also had about $3 million more cash on hand than Cornyn. Despite the inflow of big money, she hasn’t been able to erase the gap between her and the incumbent senator. A poll released just this week had her down six points from Cornyn 49%-43%, with 7% undecided.