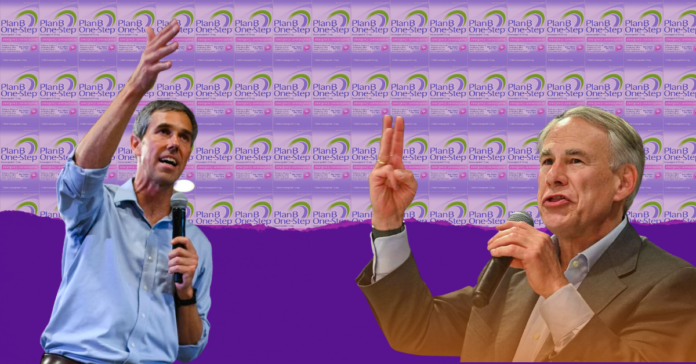 On Friday, Gov. Greg Abbott told the Dallas Morning News that victims of rape of incest “can get the plan B pill,” to prevent a pregnancy. But the controversial form of emergency contraception is not widely available, especially to low-income Texans, thanks to the large proportion of residents who are uninsured – Texas has the highest uninsured rate in the nation – and the state’s lack of programs that provide access to contraception like Plan B.

In the pre-recorded segment Abbott said of rape victims, “By accessing health care immediately, they can get the Plan B pill that can prevent a pregnancy from occurring in the first place. With regard to reporting it to law enforcement, that will ensure that the rapist will be arrested and prosecuted.”

His challenger in the Texas governor’s race quickly responded in a new 30-second ad, replaying a video of Abbott last fall claiming, “we will eliminate all rapists from the streets of Texas,” followed by video released last week of Abbott saying “rape victims can get the Plan B pill.” The short ad ends with white letters on a black screen saying that “Abbott can get fired on November 8. Let’s make sure he does.”

The YouTube ad is titled, “Don’t Worry: Abbott’s Cruel Message to Victims of Rape and Incest After He Banned Abortion.” The O’Rourke campaign said the candidate “is holding Greg Abbott accountable for signing the most extreme abortion ban in the country.” The statement continues, “Abbott’s dangerous abortion ban with no exception for rape or incest took effect in August as Texas leads the nation in rape offenses on his watch, and as the arrest rate for rape has fallen by nearly half since he took office.” Meanwhile, the campaign says,  “Abbott allows over 3,000 untested rape kits to collect dust in his state crime labs. Texans deserve better than this extremism, cruelty and incompetence.”

Emilee Whitehurst, the CEO of Houston Area Women’s Center, told The Texas Tribune that Abbott’s comments were insulting to victims of rape or incest. “To presume Plan B could be a substitute for abortion care represents such a fundamental misunderstanding of the reality of women’s lives and our biology,” she said.

Chau Nguyen, a trauma therapist with JEM Wellness & Counseling in Houston and a columnist for RA News said, “Do all Texans have easy access to emergency contraception? The answer is no.  Women of color and low-income women already face barriers to accessing basic healthcare needs,” she continued, “and that includes emergency contraception,  which is not covered by Medicaid and costs up to 50 dollars for a pill.  The sad truth is, women will choose putting food on the table to feed their kids over their own health care. And that can greatly put their own lives at risk.

Ms. Nguyen also pointed out that many victims of rape or incest are traumatized and often don’t seek help immediately.  “Rape survivors suffer something known as rape trauma syndrome in the hours, days and months following their assault . So you are not thinking about the morning after pill, or going to police within the first 72 hours of your rape,” she said.

Ms. Nguyen added that the Governor’s comments “send a damaging message to survivors: that they are the ones responsible for what happened to them. Rape and incest are incredible ordeals. As a trauma therapist , I would suggest the governor learn and understand rape trauma syndrome, spend some time with rape victims, and witness the emotional toll it takes on women and girls of sexual violence before making grossly insensitive remarks.”

Ms. Nguyen revealed in an intensely personal column Tuesday that she had an abortion when she was 18 years old and said,  “the privilege of accessing a safe and affordable abortion and personally deciding I did not want to stay pregnant, had a profound impact on me.”

“I have never regretted my decision to seek an abortion,” she continued, “one that changed the trajectory of my adult life.”