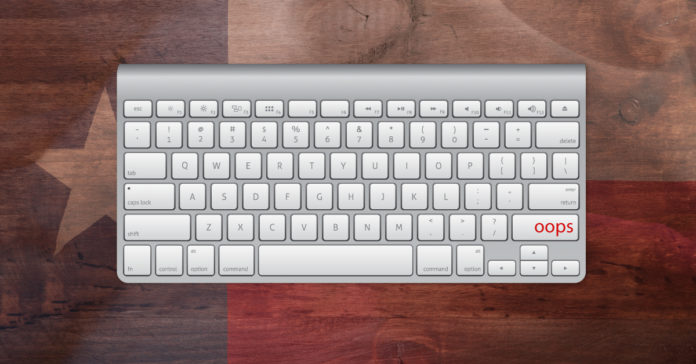 The Texas Republican Party committed the political equivalent of an own goal when it sent its 2020 election strategy to the Democrats. The Texas GOP plans to target 12 freshman Democrats who won state House races in 2018.

Entitled “Primary/General Election 2020 [Draft],” the document began showing up in Democrats’ inboxes Monday night. One of the main components of the plan is a disinformation campaign.

Republicans plan to spend about $6,000 buying up domain names similar to those owned by Democratic candidates. The domains would then be turned into ‘microsites’ that are filled with negative information.

The strategy prioritizes Democrats who beat Republicans by 4 percent or fewer. Six of the representatives targeted live in the Dallas-Fort Worth Metroplex. Four of the targeted Democrats represent the Austin area, and two are from Greater Houston.

Texas Republican Party Chairman James Dickey confirmed the authenticity of the document and hand-waved it away.

“Not sure why it’s news that we’re aggressively working to earn the support of all Texas voters for all our candidates,” he told the Houston Chronicle.

Within the proposal was a tacit acknowledgment that President Donald Trump has a “polarizing nature” that could prove damaging to Texas Republicans.

“Some Republicans will refuse to turn out during the General Election because they don’t want to vote for [Trump],” read the memo. The document recommends creating a so-called “contingency budget” to combat any damage the president might do.

The funds would be used to target ‘never-Trump’ voters. Republicans reluctant, or unwilling, to vote for president will be encouraged to vote for U.S. Senate and state legislative races.

One way the Texas GOP plans to court ‘never-Trumpers’ is by highlighting the party’s diversity. The plan calls for rolling out a series of short videos of candidates explaining why they are Republicans.

The proposal also acknowledges the difficulty Republicans will face in the election without straight-ticket voting.

Straight-ticket voting accounted for 64 percent of the ballots cast in Texas’ 10 largest counties in 2018.

The memo recommends a pithy catchphrase to encourage people to vote Republican down-ballot. One suggestion: “Vote Right To The Bottom.”