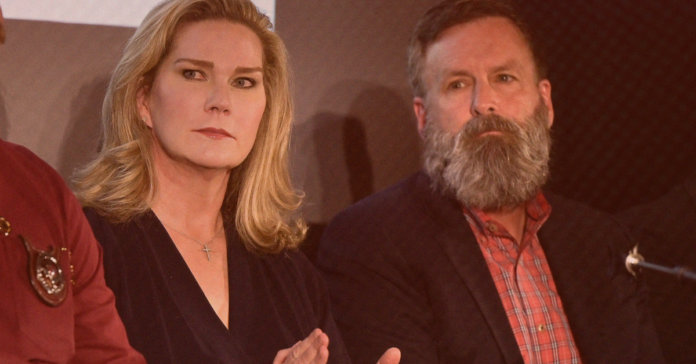 True the Vote, a Houston nonprofit, is being sued in federal court for allegedly hacking and committing defamation against Michigan election software company, Konnech Inc., claiming that the company has ties to the Chinese Communist Party and was responsible for voter fraud in the 2020 election cycle. The suit says that the group targeted the company founded by Asian American Eugene Yu, and published the unfounded claims, resulting in death threats against Yu and his family, as well as damage to the reputation of the company.

The suit stated the group has “intentionally, repeatedly, and relentlessly attacked Konnech and its founder Eugene Yu with…a unique brand of racism and xenophobia by their completely baseless claims that Konnech, its founder, and employees are “Chinese operatives,” who are spearheading a “Red Chinese communist op run against the United States.”

Last week in Texas, U.S. District Judge Kenneth M. Hoyt, issued a restraining order against the groups two founders Catherine Engelbrecht and Gregg Phillips, stating that he did so to prevent the group from using potentially stolen information to push voter fraud claims. He said he felt it was vital to protect election integrity with the November election cycle, which is only a few weeks away.

The suit also said that “Absent intervention of this Court, such damaging behavior will continue to occur, which is particularly problematic in light of the upcoming 2022 midterm elections, for which Konnech has contracts to provide election logistics software for voting districts across the country.”

The suit alleges that True the Vote admitted to hacking Konnech’s systems, and as such broke multiple state and federal laws. After bragging about it on social media, the group then subsequently denied any wrongdoing, and vowed to continue their activities undaunted. They took to social media platform Truth Social to ask for prayers for the two group leaders, saying the suit “changes nothing.”

True the Vote was created by PTA Mom turned MAGA activist Catherine Engelbrecht. She and her partner in the group, Gregg Phillips, have been primary proponents of the “Big Lie” and have raised millions in donations from MAGA supporters, but have been accused of making questionable use of the funds. Both rose to prominence in far right circles, and worked with Dinesh D’Souza, Indian-American right-wing filmmaker, in the making of the documentary “2000 Mules,” which alleged election fraud.

The suit states that Phillips and Engelbrecht have been referred to as the “Bonnie and Clyde” of election fraud and “they have enriched themselves by spreading conspiracy theories, which they present as factual in nature, about the 2020 Presidential Election, largely funded by money funneled through Defendant True the Vote.”

The group has a history of being sued since it began its activities, which have never led to evidence of fraud. In 2021 they were sued by a North Carolina businessman who had donated $2.5 million. The donor, Fred Eschelman, claimed in the suit that they uncovered no evidence of voter fraud in the 2020 elections despite their claims that they had indeed done so. In that suit, Eschelman alleged that the group was simply jumping from one election conspiracy theory to the next, not actually using the money donated to try to find fraud.

The Texas Tribune reported that they have distributed much of the money collected to a company owned by Phillips, Engelbrecht herself, and the law firm of James Bopp Jr. Bopp is known for helping with arguments that have taken away abortion rights, the campaign law finance revision known as Citizens United, which has resulted in politics becoming awash with historic levels of campaign money. He was also part of the legal team in Bush v Gore, resulting in Bush being declared the winner.

In August, Phillips vowed yet again to reveal the evidence of election fraud from 2020, but after gathering a crowd of conspiracy theorists at an Arizona event he called “The Pit” where he would reveal “the ripcord,” a website he claimed would show 10 times more proof of fraud than the documentary he and his co-founder starred in. But according to the Daily Beast, that website turned out to be a shoddily constructed website with a paywall set up to gain access to the so-called evidence.

And after failing to provide any real evidence, the occasion turned into a fiasco with Phillips being removed by Scottsdale police for carrying a gun into his own event at the hotel. The bar on premises automatically makes it illegal to carry a firearm onto the vicinity. However, Phillips claimed no one ever told him he couldn’t do so while making a scene, having a heated argument with hotel staff.

Not only were death threats allegedly made against Yu’s family, but the group’s spreading of false election information has resulted in violence-laden social media threats to Texas election workers. Earlier this year, a congressional report stated that the work of these groups making “personal attacks on national media outlets” has led to alarming threats against Texas election administrator Heider Garcia, including a social media call to “hang him when convicted for fraud and let his lifeless body hang in public until maggots drip out of his mouth” and messages threatening his children, stating, “I think we should end your bloodline.”