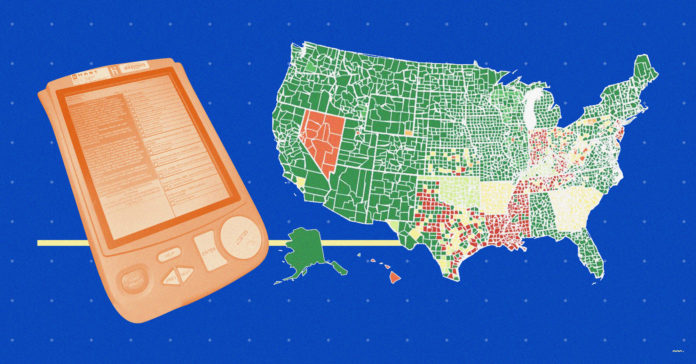 My brother lives close enough to me that he watches my cats when I go on vacation, yet we voted in completely different ways at the polls this month. In Harris County, I used a direct-recording electronic (DRE) voting machine (specifically a Hart InterCivic eSlate) that does not have a voter-verified paper audit trail (VVPAT). In Liberty County, my brother marked up paper ballots that were scanned by a Hart scanner.

If all that sounds a little haphazard and complicated, that’s because it is. Texas has one of the most varied of all voting systems of any state. VerifiedVoting.org has a neat online tool you can visit to see just how many different ways states use for voting per county, and almost none come even close to the hodgepodge of methods in use in Texas.

Is it a good thing or a bad thing? It’s kind of both, according to Brandon Rottinghaus, a political science professor at the University of Houston.

“It’s worked fairly well so far,” he said. “We haven’t had any major election controversies, but with closer elections, it could be a problem.”

The system comes from a very hands-off approach by the state that delegates power to local counties to control their elections. On the plus side, this makes election tampering in Texas nearly impossible on a statewide level because there isn’t one system to hack. Even if an operator only wanted to concentrate on red or blue counties, they would still have dozens of different methods they would have to interfere with in order to sway an election for, say, governor.

“If you think of it in purely defensive terms, then it’s safer to cast ballots in different ways, but I don’t think that’s a good reason to keep doing a patchwork election,” said Rottinghaus.

The downsides do seem to outweigh the virtues. For one, delegating to the various counties also means burdening them largely with the financial responsibilities for running elections, and many counties are not coming through even when the law dictates they should. Rottinghaus’ research shows that many counties are failing. For instance, 20% of Texas counties failed to prepare sample ballots, and 50% did not inform voters that straight ticket voting was no longer an option.

In addition, these systems require maintenance, and with falling local tax revenues from the coronavirus outbreak and oil bust some districts are having trouble making do. Even wealthier ones are struggling. The Coronavirus Aid, Relief and Economic Security Act provided some election funding, but that is quickly running out.

“Machines age quickly and need a fair amount of maintenance,” said Rottinghaus. “Harris County is going to have to confront this soon. Part of the reason Harris County was able to upgrade was because the federal government stepped in. But that sort of money is reactionary and related to crisis. It doesn’t help the long term.”

Where we are most likely to see a failure of the patchwork system is if there is a statewide recount for a close race, something that is very possible with President Donald Trump and former Vice President Joe Biden nearly neck-and-neck in the state this year. The flaws in each county’s systems are likely to become apparent under stress, which is what happened in Florida in 2000. Attention to the faulty and inadequate voting practices led to the passage of the Help America Vote Act to improve elections, which is the last time many Texas counties got significant upgrades to their election equipment.

Should the presidential or U.S. Senate race in Texas be especially close, we could see a repeat of what happened in Florida in 2000. According to VerfiiedVoting.org, Florida now has a universal system of hand-marked ballots with scanners by Election Systems & Software. The end of Texas’ wild west voting practices could go the same way if the state has to recount votes.

“If there are high-profile failures of the system, you may see some shift in that direction,” said Rottinghaus.