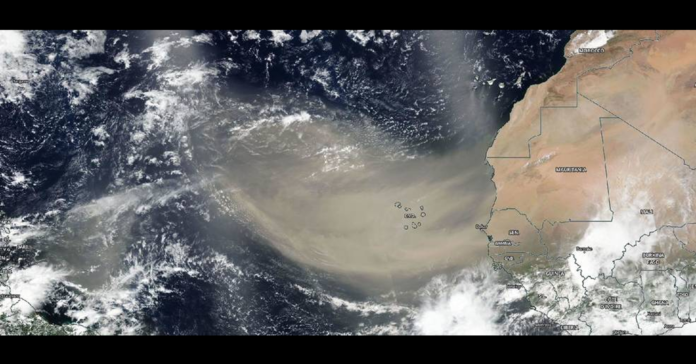 Whether you’re a morning runner or a sunset walk enthusiast escaping the house during quarantine, you’ll likely see a new phenomenon blowing into the Texas skies this week, replacing our bright, tropical-blue sky.

A cloud of Saharan dust – traveling more than 5,000 miles from Africa over the Atlantic Ocean – is expected to reach the United States sometime this week.

It sounds like an extraordinary event, especially in 2020, but these dust storms are actually more common than you’d think and happen often during hurricane season, experts say.

“The dust cloud originates from the Sahara Desert. A strong burst of easterly winds push the dust and accompanying dry air across the Atlantic,” said Jeff Lindner, a meteorologist with the Harris County Flood Control District. “It gets caught up in the trade winds going across the Caribbean, bringing a hazy, smog-like effect.”

The National Weather Service says that Saharan dust plumes move across the Atlantic several times a year, typically between spring and fall. They frequently reach the Caribbean, and occasionally the US mainland. This one is unusually large in both size and density. In fact, it’s so dense that astronauts monitoring satellite imagery from the International Space Station can see a large swirl of reddish-brown over the western Central Atlantic.

In addition to a hazy, smog-like effect, Lindner says Texans may notice a “milky” look to the sky, and fine dust particles settling on their cars.

As for allergy sufferers, vulnerable people – those who might be recovering from coronavirus or already sensitive to allergies – should monitor conditions and symptoms, but rest easy that most of it will be treatable at home.

“This is probably not going to be helpful to coronavirus symptoms,” Lindner said. “This could irritate the lungs and the upper respiratory system, making those with asthma, breathing problems, underlying conditions, or even bad allergies a bit more susceptible. This is going to be an aggravating particulate, so you’ll see a lot of symptoms like a sinus pressure headache, coughing, sneezing, or runny nose. But, that’s generally the extent of it. Given the current status of coronavirus, some symptoms might be similar, so you should know this is coming and be familiar with the differences.”

But the effects of the dust won’t be all bad.

The tiny dust particles also scatter the sun’s rays at dusk and dawn, too, which the National Weather Service says could mean some especially colorful sunrises and sunsets.

The Saharan Dust cloud will also be helpful for Gulf Coast Texans. These dust plumes help hamper hurricanes and tropical storms forming over the ocean. So, although it may mean increased allergies, the dry air and layer of particles settling over Texas brings with it a welcome reprieve from the start of hurricane season as meteorologists may be monitoring fewer storms over the coming weeks.

Regardless, Texans should take notice of this dust storm. Eric Berger and Matt Lanza, meteorologists at Space City Weather in Houston, say the dust plume could be a historic event.

“This dust…is normal in the sense that we periodically see dust transported in this way. But what is abnormal is the extent of the dust, which some scientists estimate may be the most intense in 50 years,” they wrote on the Space City Weather blog. “This plume may weaken some as it crosses the Gulf of Mexico toward Texas, but chances are this is still going to be unlike anything that most of us have seen in Texas.”