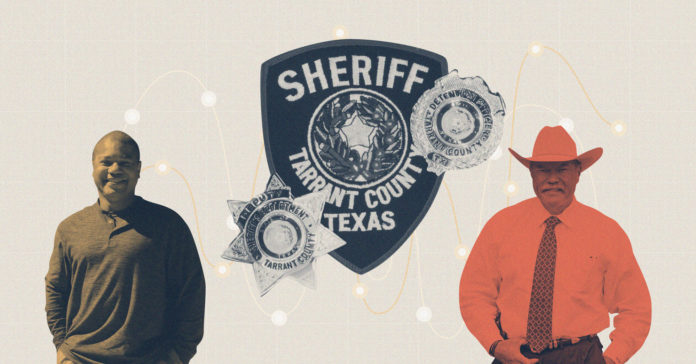 Tarrant County’s sheriff race between incumbent Bill Waybourn and Democrat Vance Keyes is a chance to weigh in on a foundational Christian principle, local pastors suggest. And that is society’s willingness to recognize in the immigrant and criminal the dignity inherent to all.

Elected in 2016, Waybourn’s tenure has been one marked by controversies. In May, a woman being held on assault charges gave birth unattended and “without anyone knowing,” according to the Fort Worth Star-Telegram, which broke the story at the time. The baby died 10 days later. A subsequent investigation by the Texas Commission on Jail Standards unearthed no violations in this particular case. Nevertheless, the jail lost its certification that same month after an inmate’s suicide revealed employees there were not conducting face-to-face observations at the required intervals. And in July, three detention officers were criminally charged for assaulting an inmate —  breaking his cheek, fracturing his ribs, and collapsing one of his lungs in the process. One officer interviewed after the fact told authorities beatings like that one were routine.

For Rev. Jorene Taylor Swift, pastor of Celebration Community Church in downtown Fort Worth, each of these point to a common cause, and that is the inability to “value the fact that we are created in the image of God.”

She continued: “I’m not going to judge if he’s a Christian, but I don’t see much in how he runs his jail and his people under him that tell me there are Christian principles —  that are just basic human values — that he abides by.”

Rev. Tom Plumbley is the senior minister at First Christian Church, also located in Fort Worth. Like Swift, he sees the reports out of the county jail as evidence of a failure to honor the God-given humanity of its inmates. At the same time, he is quick to point out that Waybourn and his team are far from the only guilty ones when it comes to doing so.

“What I see happening way too frequently is that we very quickly paint criminals as monsters,” he said. “In fact, we use that word and other words much like it to talk about people who have broken the law.” In doing so, “we quickly remove their humanity and then feel justified treating them less than human in every way, from prison sentences for things that are not violent at all, to killing them.”

The same is often true for immigrants, Plumbley noted, yet another area in which Waybourn has curried controversy. In 2017, he was one of 18 Texas sheriffs to enter into a partnership with Immigration and Customs Enforcement to hold on to inmates found to be in the country illegally until federal officials can decide whether to deport them. Last October, Waybourn defended the action in a White House media briefing, where he described ICE officials as “honorable people doing noble things, standing on the wall between good and evil for you and me.”

Waybourn did not respond to questions submitted via email, but this paradigm of good versus evil is one through which the sheriff appears to view his own role. A sweep of his campaign website reveals four variations on the theme, including a statement that the divisions he’s created “are now leading the way for national programs to stem the tide of evil before it destroys more people.”

Language like this points to a larger failure as a society to wrangle with the nuance in ourselves and others, says Rev. Ryon Price, the senior pastor at Fort Worth’s Broadway Baptist Church.

“From a religious perspective, we’re living in a very dualistic, almost Manichean, time when so few of us understand that we’re really an admixture of good and evil,” he said. That is not to say good and evil are somehow false categories, only that they are rarely as mutually exclusive as many would like to believe.

Plumbley put it in even simpler terms: “Dangummit, just because somebody talks God language doesn’t make them a righteous person.”

Ultimately, no one is spared the harm of policies and paradigms that fail to account for the humanity of all, says Price.

“I’m concerned about what some of these policies have done to not only the soul of our nation, but also the souls of its sons and daughters and kindred who wear the uniform,” he emphasized. “I’ve pastored law enforcement officials, been in small groups with officers where we were able to speak vulnerably with one another. And what we do not need right now is demonization. What we do need is a sense of common humanity.”