Home Faith Texas Mormons Are Famously Loyal to GOP, but Some Are Voting for...
Facebook
Twitter
Email 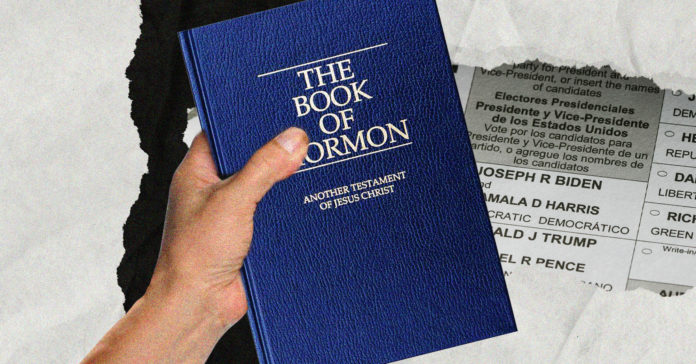 Donald Trump, with his dire declarations of Christianity being “under siege” and promises of power to its followers, has spent his political career casting himself as a vigilante for the Religious Right. The result has been overwhelming support from many of the group’s members, including the record number of white Evangelicals who lined up to vote for him in 2016.

Members of the Church of Jesus Christ of Latter-day Saints, or Mormons, have been a thorn in Trump’s side almost from the day he announced his plan to run for president. And while pollsters aren’t banking on Utah flipping blue, a lackluster showing from Texas’ more than 362,000 Latter-day Saints could constitute a speed bump Trump can’t afford in a state that is now considered a toss-up for Tuesday’s election.

Trump’s troubles with the LDS community can be traced all the way back to the 2016 primaries, when he took home just 14% of the vote in Utah, a state that is 62% LDS. A majority of Mormons nationwide would come around in time for the general election, but only barely. According to a post-election survey, Trump won 55% of the group known to clock in closer to 80% in favor of Republican presidential candidates.

Polling on members of the faith is scarce. That said, what exists suggests Trump has done little to improve his standing with the group in the intervening years, including a 2020 Gallup survey in which Mormons gave Trump a 60% approval rating.

Rob Taber is a history professor at Fayetteville State University and the director of the group Latter-day Saints for Biden. He is bullish about what this ambivalence could mean for LDS turnout for Biden in critical states, including Texas.

“We’re seeing him within a couple of points in Texas, a couple points ahead in Arizona and Florida now,” Taber said. “Part of that is built by Latter-day Saints who are deciding to support Joe Biden this year.”

Doug Branson of San Antonio is one such LDS voter. Eight years ago, the Idaho native was knocking doors and phone banking for Mitt Romney, someone he believed to be a “good dude.” Fast forward to today, and he says voting for the Republican candidate doesn’t even feel like an option.

“From day one, [my wife] and I have not been interested in Trump,” he said, calling the president “someone who is immoral and only cares for himself.”

This emphasis on Trump’s character and lack thereof is a theme Taber says he’s encountered again and again as part of his work for Latter-day Saints for Biden.

“We’re seeing a lot of discussion of Joe Biden’s integrity, that he’s a man of principle,” he said, referring both to the conversations taking place on social media as well as the reasons supporters offer when submitting their endorsements for Biden.

The reason for this likely goes well beyond a cultural discomfort with “contention,” a word often batted about in sermons and Sunday School lessons. Rather, Taber points to a core LDS belief in the responsibility of those with power to govern as one revelation given to the faith’s founder, Joseph Smith, states, “by gentleness and meekness, and by love unfeigned” (Doctrine & Covenants 121:41). Indeed, a major theme of the Book of Mormon is the potential for immoral political leaders to sow both physical and spiritual decay. In one particularly famous example, a king known for his love of money and “riotous living” (Mosiah 11:14) fails to prepare his kingdom against attack by an enemy nation, and his people are enslaved.

Sure enough, “decency and civility” are at the forefront of Mormon and former Arizona Sen. Jeff Flake’s new ad imploring fellow Republicans to vote for Biden. “Character, moral leadership and integrity are values we cannot put aside when we cast our vote for president,” he warns.

A separate — albeit related — area of concern Taber hears from Mormons, and in particular the men, is that of Trump’s disregard for political norms.

Rob Vincent is an attorney and Latter-day Saint who lives with his wife and four kids outside of Plano. Armed with passion and specifics, the litigator drilled into this point repeatedly.

“He thinks the Justice Department is his own private Gestapo squad where he can attack political enemies,” Vincent said. Particularly concerning, he said, have been the president’s attempts to wield the Office of Attorney General like his own personal law firm, pressuring first Jeff Sessions into blocking investigations about Russian interference and now Bill Barr to investigate Biden. “It’s dangerous. We are in a dangerous situation.”

Even more than the men, an estimated two-thirds of whom still support Trump, Taber says it’s LDS women who are ready to see Trump go. “This is the case across age groups, across regions,”  he said. “We see it every day.”

As a life-long Mormon and Democrat, Karin Olson is accustomed to feeling like an outsider. “I figured out I was not in the majority in the elementary school carpool during the Ford-Carter election,” she said. Trump has started to change that.

Olson is active on social media, where she alternates between sharing scripture verses and her latest political takes. “People know where I stand,” the Huntsville physician said. “And I find more people coming through the cracks via social media to say, ‘Thank you for sharing that. It’s good to know I’m not alone.’” Of those, all have been women.

Underscoring this point is a recent analysis by The Salt Lake Tribune and the Center for Responsive Politics, which found that women in Utah have donated $708,000 to Biden’s campaign, compared with $429,000 for Trump. Men, by comparison, donated nearly equal amounts to the two nominees.

Making Olson’s job easier, she says, is the church’s emphasis on the need for members of the faith around the world to support refugees and, more recently, stand against racism. As recent as Oct. 27, senior church official Dallin H. Oaks, in a virtual speech to BYU students, declared the statement Black lives matter “an eternal truth all reasonable people should support.”

Nonetheless, it would be wrong for the Biden camp to start celebrating quite yet. Olson, Vincent and Branson all stressed they are still far from the majority in their support for Biden. And then there’s the fact that many wavering partisans ultimately fall back into line once they arrive at the ballot box. As the most reliably conservative religious group in the country, Mormons are about as partisan as it gets.

“A lot of [Latter-day Saints] still equate being a good member with being a good Republican,” Vincent said, noting that loyalty is a virtue held in high esteem within the faith community. “We don’t criticize our leaders, even when the criticism is true.”

What’s more, nearly 13% of LDS voters nationwide voted for fellow Mormon Evan McMullin in 2016, while 6% voted for the Libertarian candidate Gary Johnson. What happens to those voters in a year focused entirely on the two primary party candidates is unclear. According to Eastern Illinois University’s Ryan Burge, the result is a likely wash as both parties claim a greater share of the Mormon pie.

Still, Taber is optimistic. Not all of the 1,500 LDS endorsers for Biden give their full political history, but he estimates based on those who have that somewhere between a third and a half are first-time Democratic voters in a presidential race.

“This is now my third presidential cycle working with other Latter-day Saints and having these political discussions,” he stressed. And never has it been so easy, he says, to get people to “give the Democratic nominee a second look.”