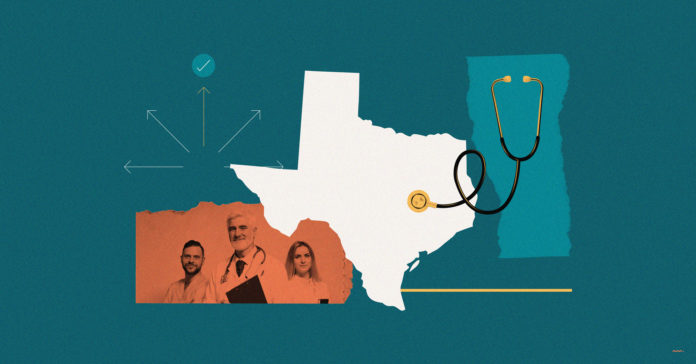 In the latest edition of his Fiscal Notes publication, Texas Comptroller Glenn Hegar seems to be making the case for Medicaid expansion in Texas, but he stops short of a full endorsement of the idea that has long been opposed by his Republican buddies in the state Legislature.

It has been estimated that more than 650,000 Texans lost their health insurance when they lost their jobs due to the pandemic. With these new additions, nearly three of every 10 adult Texans under age 65 are now uninsured.

“The lack of health insurance keeps many from seeking health care services and preventive care,” Hegar wrote. “But aside from the personal toll, a high uninsured rate has economic implications for the state as well, due to factors such as increased spending by doctors, hospitals and local governments for uncompensated care and the rising cost of health care services and insurance premiums.”

Texas is one of just 12 states that has not taken advantage of expanded Medicaid offered with passage of the Affordable Care Act.

Hegar acknowledges that other states that have acted have seen bigger declines in their uninsured rates, but he also notes that “per-person costs for Medicaid expansion have exceeded original estimates by 76%, leading to cost overruns of 157%.”

“Uninsured Texans are demographically and geographically diverse, making a ‘one-size-fits-all’ solution unrealistic,” according to Hegar. “When considering policies to address the state’s high uninsured rate, a variety of strategies should be considered.”

The comptroller’s list of recommendations for increasing the number of Texans with health care coverage is short and does not, specifically, mention expanding Medicaid. Instead, he suggests additional investments in outreach and enrollment assistance for public insurance programs and market-based insurance coverage along with expansion of digital health solutions, such as telemedicine and remote patient monitoring.

To reduce the number of uninsured people resulting from the pandemic, Hegar mentions the payroll protection program passed by Congress earlier this year as an example of actions taken that will help. Most of the assistance offered by the PPP has run out, and Congress has been deadlocked on a new stimulus bill for months now.

The only other idea Hegar offers is not his, but is instead a public-private partnership first proposed by the Texas Public Policy Foundation. TPPF suggests a federal Workforce Recovery Act that would include a national “business-interruption” insurance plan providing coverage for payroll, operating costs, rent and debt payments. The proposal is based on the federal Terrorism Risk Insurance Program that provides compensation for losses due to terrorist attacks.

While Hegar sidesteps the Medicaid expansion question, experts in the health care industry say Texas should and must be the next state to expand. They will be taking their position to Austin for the 2021 legislative session.

It has been estimated that more than a million more Texans would have access to health care if Texas acted.