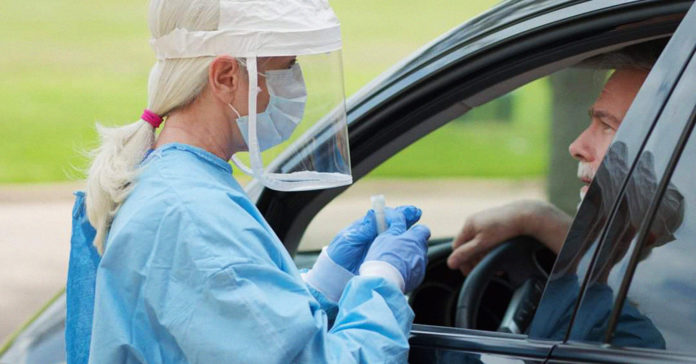 Texas will join several other states in opening drive-thru facilities to test for the coronavirus, also known as COVID-19.

President Donald Trump spoke about the initiative in a news conference Friday.

“We’ve been in discussions with pharmacies and retailers to make drive-through tests available in the critical locations identified by public-health officials,” he said. “The goal is for individuals to be able to drive up and be swabbed without having to leave your car.”

The number of cases in Texas, as of this writing, is 68, according to the Texas Tribune, and you can use this link to see where they are.

The symptoms to watch for are fever, cough and shortness of breath.

Testing in Houston should begin this week. The locations for the tests have not yet been confirmed, but Mayor Sylvester Turner says they will be staffed by Houston hospitals. The facilities will follow the Centers for Disease Control guidelines of testing people with relevant symptoms who have traveled to places that have experienced community transmission or who have been in contact with a person known to be infected.

San Antonio will also be opening facilities. These are slated for use by health care professionals and first responders, as well as a few high-risk patients. There is no word yet on whether the drive-thrus will expand to the general public.

Dallas’ first drive-thru testing location was the Neighborhood Medical Center clinic. The facility offers many different tests but has started making the coronavirus testing available courtesy of Clinical Pathology Laboratories. Many more patients have requested the tests than have had it performed due to limited quantities, dozens have been able to acquire one without even leaving their cars. The doctors decide who is eligible, and the test requires three days to come back.

The second site to offer drive-thru testing is Parkland Health & Hospital System. It will treat its own patients plus first responders and other health care workers starting Monday, The Dallas Morning News reported.

Another city where the facilities are open is Austin. Baylor Scott & White has set up its drive-thru at 2608 Brockton Drive, and it opened Friday. As with the Houston locations, there are restrictions on who is eligible for the testing. Patients must create a profile and fill out an online questionnaire before they will be admitted in the drive-thru. Some patients may be referred to their doctors.

Caution in the amount of testing continues in the United States thanks to a shortage. As of Friday, fewer than 14,000 tests have been conducted, far less than the 1.5 million promised by Vice President Mike Pence, the public face of the government’s response to the outbreak. Experts chalk up the lack of testing in America to a combination of government red tape and poor leadership from the Trump Administration.

Drive-thru testing has already been a big hit in South Korea, where a swift response to COVID-19 has reduced the number of new cases the country has seen since the initial spike of confirmed cases. There, the procedure for testing takes around ten minutes. Results are texted to patients. The pace of testing in the country far outstrips that of the United States.