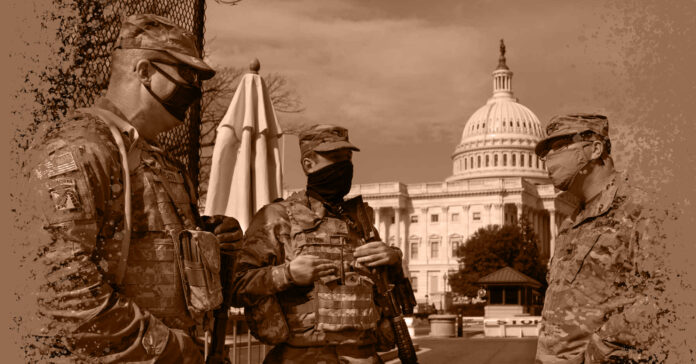 The Justice Department formally cleared the way for members of the National Guard to form a workplace union last week, which may offer some relief for members of the Texas Guard currently serving on the southern border in difficult conditions.

“My hope with a union would be that we could organize a coherent way to get [our grievances] to [Texas Military Department] leadership and demand substantive answers on these issues, instead of just casually grumbling about it,” an unnamed Texas junior medic told the Army Times. The report also mentioned other Texas Guards who were enthused by the ruling.

Federal law prohibits soldiers from forming a union while part of the active military. However, state employee unions in Connecticut sued, saying that the law should not apply to the National Guard, who are technically state employees, rather than federal ones. The DOJ ultimately asked the judge in the case to dismiss it as they agreed with the plaintiffs.

Allowing National Guard members to unionize is particularly important at the moment as many feel that they are not being offered proper safety precautions from COVID-19.

However, even if the Texas National Guard does form a union, their power will be more limited here than in some other states. Texas law prohibits state employees from striking, taking out one of the most potent tools in the union toolboxes.

Nonetheless, the union would give the Texas National Guard a more organized voice to air their grievances with Operation Lone Star, the massive deployment of 10,000 guards to the border to combat undocumented immigration.

The operation has been something of a disaster as Governor Greg Abbott uses the move to shore up his conservative bonafides ahead of tough Republican primary challenges to his office. Many apprehensions have already been found to be instances of entrapment, with operatives intentionally forcing immigrants to trespass in order to arrest them. At least one judge has already found that the actions of the operation violate the U.S. Constitution, paving the way for anyone who has been apprehended to be released.

The guards are suffering from poor management as well. At least four have committed suicide while serving in Lone Star, and more have deserted. Guards are also complaining about late or missing pay, inadequate protection from COVID, and cuts in tuition assistance.

Abbott has sternly denied that these criticisms are warranted, calling them “Political.”

“It is offensive for any of these people raising the issues to politicize the issue of a military member losing their life,” Abbott said. “If they are saying something about what’s happening in the National Guard in Texas, why are they not at the very same time saying something about President Biden and … hundreds of members of the United States military losing their lives to suicide? Why are they silent about that? The answer: they’re just playing politics. The life of a soldier, far more valuable than the words of a politician playing politics.”