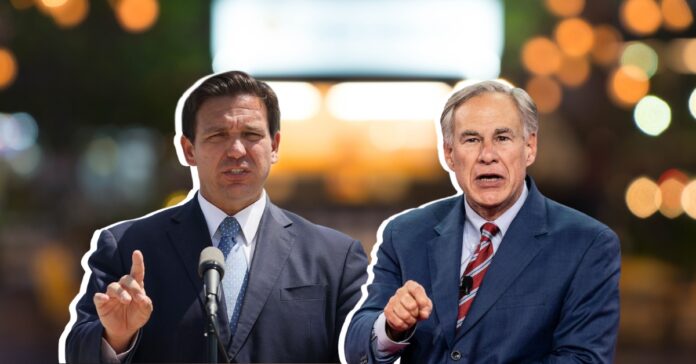 At the crux of the nation’s hyperpartisan political and culture wars stand Texas and Florida, the far-right Republican axis, whose right-wing trifectas not only survived the midterms but emerged stronger, bolder, and bigger. While the widely expected GOP “red wave” fizzled in much of the nation, Texas added two seats to its predominantly Republican congressional delegation and Florida, until recently a purple battleground state, fell fully into Republican hands.

Democrats surprised nearly everyone by defeating many candidates backed by former President Donald Trump, holding onto the majority in the U.S. Senate and losing fewer seats than expected in the House. But the Republican victories in Texas and Florida—with large delegations in Congress, baskets of electoral votes (Texas 40, Florida 30), and enormous resources—underscore fundamental divisions in the country and leave little doubt that these second and third megastates, after California, are playing a definitive role in shaping the political direction of the country.

For some time now, population experts and political scientists have relied on Texas and Florida, the two states with the biggest population growth in the past few years, to give us a lens into the country’s economic, political, and demographic trajectory.

“Texas is the future of America,” said Steven Pedigo, director of the Urban Lab at the University of Texas at Austin’s Lyndon B. Johnson School of Public Affairs. “That’s what the 2020 Census tells us, along with the last 20 years of economic and demographic data.’’

Giving us a look at what will happen to our politics when the United States becomes a majority-minority country, Texas, like California, has already reached that demographic milestone.

Texas has been a majority-minority state for close to two decades, but Latinos command far less political and economic influence here than they do in Florida. Non-Hispanic white Texans make up about 39.4 percent of the state’s 30 million population. Latinos account for nearly half, around 40.2 percent, with Blacks making up 13.2 percent, Asian Americans 5.5 percent, and American Indians 1.1 percent.

Demographic and voting patterns hint at factors that contribute to the slower political and economic rise of Latinos in Texas, which has seen a larger influx of new immigrants than Florida.

“Latinos are considerably less likely than Americans overall to be eligible to vote (53 percent vs. 72 percent). This is partly because the nation’s Latino population includes a large number of people who are too young to vote or who are not U.S. citizens,” according to a recent Pew Research study.

With a dominant contingent of conservative Cubans and Venezuelans, Florida Latinos enjoy more power in their state and in Washington than Latinos do in Texas. Florida’s 27-member congressional delegation is 26.5 percent Latino. Latinos occupy high-level statewide and county posts and make up around 20 percent of the state legislature in Tallahassee.

By comparison, Latinos are under-represented in Texas. Only 19 percent of the state’s congressional delegation—the second largest in the country—are Latino. The state Legislature is 61 percent white, though the state is only 39.4 percent white.

There is, to be sure, Latino local political power in many Texas communities, especially around the Rio Grande Valley, but the state is run by primarily white Republicans.

Republicans, once slow to recognize the explosive growth and potential political influence of the Latino population—60 million nationwide, the country’s largest minority—are pouring money and deploying their staffs to conduct outreach and gain their vote. They’ve had mixed results in Texas but success in Florida, where Latino-backed Republicans scored victories in the midterms, most surprising in Miami-Dade, a longtime Democratic stronghold.

Florida Governor Ron DeSantis, with a 19-point reelection landslide, got about 77 percent of the vote in the ten precincts with the heaviest Latino populations. The only notable exception came in central Florida, where Puerto Ricans continue to support Democrats. The Puerto Rican population in Florida has grown substantially since Hurricane Maria devastated the island in 2017, and thousands migrated to Florida. Historically, Puerto Ricans have leaned Democratic, but that is changing. Even in Florida, according to the Miami Herald, support for Democrats has eroded in the past four years.

“[Florida and Texas] are different states with different Latino populations,’’ said Bob Shrum, a veteran political strategist and the director of the Center for the Political Future at the University of Southern California. In Florida, Cubans, Venezuelans, and Colombians skew conservative. Many are middle-to-upper income professionals and business executives whose families fled socialist dictatorships.

Shrum said he expected the conservative composition of Texas to change as the Latino population ages and makes economic headway. The influx of transplants, Hispanic and not, from liberal California—around 700,000 since 2010—could also contribute to Texas’s changing makeup. But Shrum said that many of those who left California for Texas are more likely to be conservative Republicans than typical California Democrats.

Texas’s growth in the 2010-2020 decade has been explosive. It added some 4 million residents, according to the 2020 Census, bringing it closer to 30 million. An astonishing 95 percent of Texas’s growth has been fueled by minority groups: Hispanic, Black, and Asian, according to the census. At this rate, the state will have 54.4 million people by mid-century. Already, Houston, Dallas, and San Antonio are among the top ten largest cities in the country, with Austin right behind in the eleventh spot. All the large cities vote Democratic while suburbs and exurbs, smaller cities, towns, and rural areas are conservative Republican.

Florida is having its own rush of newcomers. In the past two years, Florida gained approximately 706,579 residents,and the flow of transplants and high-tech companies from high-tax blue states doesn’t seem to have slowed down.

Democrats in both states have pinned their hopes on the newcomers. In Florida, the GOP was the biggest beneficiary, registering more new voters than the Democrats did in the runup to the 2020 and 2022 elections. Democrats had long had a voter registration advantage in the state but that began to change before the 2020 election.

In 2018, when DeSantis won 49.6 percent to 49.2 percent, Republicans went from having 263,000 fewer registered voters than Democrats to having 306,000 more in 2022, overtaking them for the first time in Florida history. Republicans had 45 percent registration, Democrats 24 percent, and independents 29 percent.

Governor Greg Abbott, like DeSantis in Florida, made the Latino vote a priority in his campaign for re-election, but received only 40 percent of their vote, down from 42 percent four years ago, in what was the party’s first significant play for Latino voters since the election of George W. Bush in the 2000s.

In predominantly Latino South Texas, where the GOP had big expectations, Republicans had middling results: one victory, two defeats. What happened? “It takes time and hard work, and one election cycle is simply not enough,” the Dallas Morning News noted. “Making generic assumptions about the Latino vote in Texas didn’t help either.”

Lumping Latinos into a one-size-fits-all bloc has bedeviled both parties, which seem to have failed to recognize that Latinos are white, black, and brown, and represent different cultures and nationalities.

In any case, the political tendencies of the far right in Texas and Florida are reaching into the core of American principles and policies.

In the last few years, Texas and Florida have separately championed and approved a series of reactionary measures that banned or limited abortion; constricted the teaching and discussions of race history in the United States; curbed or banned discussions on sexual and gender identity in lower grades; overturned protections for LGBTQ+ Americans, especially transgender Americans; gerrymandered congressional districts to benefit their party; and hardened immigration measures.

Abbott and DeSantis each orchestrated the right-wing agenda with an eye beyond their states. Abbott has done so relatively quietly, DeSantis visibly and volubly all over the country.

Both men easily won re-election, but DeSantis’ landslide has more repercussions. He turned Florida crimson red and polished the Republican brand, giving himself a springboard to the 2024 GOP presidential nomination should he decide to defy his former mentor and now rival, former President Donald Trump.

“DeSantis has caught a moment where he’s a stark contrast to Trump’s crazy governing style, and he’s doing it from a MAGA state,” a Republican strategist, Scott Reed, told Vanity Fair.

For now and the foreseeable future, Abbott and DeSantis will continue to advance their brand of radical conservatism.

Professor Pedigo in Austin said he believed that a more diverse Texas would turn away from the right and move to the center. He sees three major components of change: the growth and economic upswing of the Latino population; the influx of high-tech industry from other states, bringing talent that is better educated and more centrist or liberal; and urbanization, the growth of the cities and suburbs where people tend to be more independent of traditional Texas GOP politics.

Texas is a paradigm for the country, Pedigo said, a microcosm of the nation. It has the global cities, Dallas and Houston, the high-tech hub in Austin, the immigration vortex in El Paso.

Strategist Shrum, too, sees Texas slowly moving slowly to the middle. “There’s a good chance that Texas will become a purple state—not right away, but gradually.”

As for Florida, Shrum says, “If I were the Democrats, I wouldn’t be wasting my money on Florida.”

The question remains: Will the nation follow the far-right axis of Texas and Florida, the likes of DeSantis and Abbott, and if so, how far?