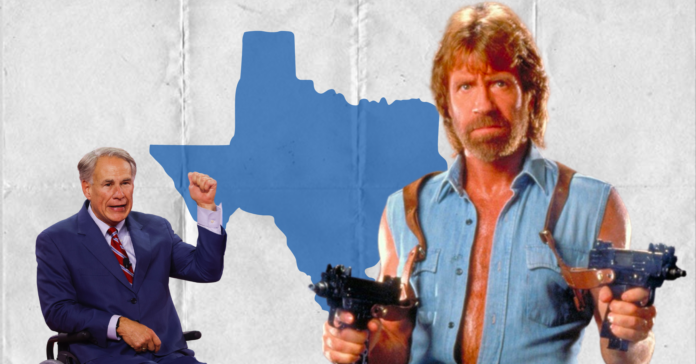 The PSA will air on television in media markets across the state starting August 17. iWatchTexas is a “partnership between communities and law enforcement that makes it easier for the public to report suspicious activity in the state, including criminal, terroristic, or school safety-related threats,” according to the governor’s press release.

In the video, the 82-year old actor states that he “loves bringing bad guys to justice.”

“But law enforcement,” he continues “can’t stop the bad guys if they don’t know who they are. That’s why I wanted to tell you about iWatch, a website, phone app and service that allows Texans to report suspicious activity.”

But, since Gov. Abbott and most Texas Republicans are adamantly opposed to red flag laws, what, exactly, will happen if someone reports suspicious activity? Will the police pay a visit to a person suspected of “suspicious activity” and attempt to nicely persuade them to not vaporize innocent children with an AR-15?

But now we see that Gov. Abbott has a plan to address the concerns of Texas parents.

“Parents, teachers, and students deserve to feel safe and secure returning to school this fall, and who better to help spread the message about the iWatchTexas reporting system than ‘Texas Ranger’ Chuck Norris,” said Governor Abbott. “We ask Texans to utilize iWatchTexas to report nearby suspicious activity to help our law enforcement quickly and effectively respond to any criminal, terroristic, or school safety threats. If you see something, say something and together we can protect our children, teachers, and communities.”

“There is nothing more important than keeping our schools and communities safe,” said Governor Abbott.

Except guns. Guns are more important than keeping our schools and communities safe.