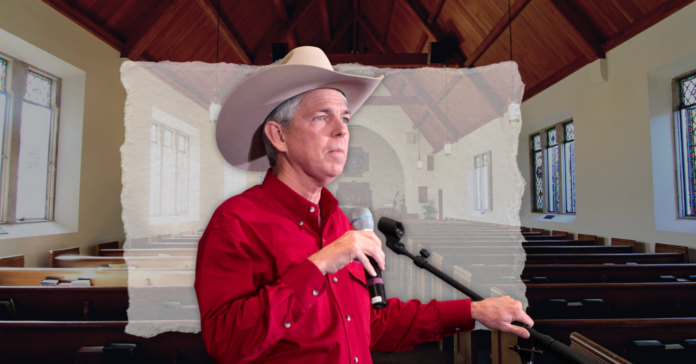 Opposition to the principle of separation of church and state appears to be a “retread” of a decades-old argument promoted by the controversial Texas activist, David Barton, according to the Religion News Service.

In 1988, Barton founded WallBuilders, a group committed to  “presenting America’s forgotten history and heroes, with an emphasis on the moral, religious, and constitutional foundation on which America was built – a foundation which, in recent years, has been seriously attacked and undermined.”

The Wallbuilders website further states that, “In accord with what was so accurately stated by George Washington, we believe that ‘the propitious [favorable] smiles of heaven can never be expected on a nation which disregards the eternal rules of order and right which heaven itself has ordained.’”

In the early ‘90s, the Rev. Jerry Falwell, founder of Liberty University and co-founder of the Moral Majority, touted a book by Barton called “The Myth of Separation.” Shortly after, Falwell said on his television show, “Let everyone know that this separation of church and state business is bogus.”

While the idea may not have originated with Barton, Kristin Kobes Du Mez, a historian and professor of history at Calvin University, said he is “extremely influential in evangelical spaces, and has been for decades.”

Barton was the vice chair of the Texas Republican Party from 1997 to 2006. He served as a Republican National Committee counselor in the 2004 presidential election in order to court evangelicals. He’s been cited and praised by conservative lawmakers and politicians, including Ted Cruz. In 2016, Barton’s PAC endorsed Cruz for president before eventually backing Trump.

Barton continued to exert influence in Republican circles during the Trump administration. One of Trump’s faith advisers, Texas pastor Robert Jeffress, delivered a sermon on “Freedom Sunday” entitled “America is a Christian nation” that dismissed the notion of separation of church and state. When the church celebrated Freedom Sunday again three years later, Jeffress enlisted David Barton to deliver the sermon directly, and introduced him as a “patriot and a prophet of God.”

According to the Religious News Service, Barton bases his rationale on an 1802 letter penned by then-President Thomas Jefferson to the Baptist Association of Danbury, Connecticut.

Jefferson’s letter assures the Baptists that the “establishment clause” in the First Amendment of the U.S. Constitution creates a “wall of separation between Church and State,” when it affirms that Congress shall “make no law respecting an establishment of religion or prohibiting the free exercise thereof.”

Barton argues that the “wall of protection” imagined by Jefferson and the founding fathers was intended to operate in one direction: to prevent government intrusion into religious matters, and that it mostly applied to the federal government, not the states. The WallBuilders website argues that the “‘separation of church and state’ currently means almost exactly the opposite of what it originally meant.”

Historians disagree, noting that Jefferson was an avid reader of Baron Montesquieu and Henry St. John, Lord Bolingbroke. In the Spirit of the Laws (1748), Montesquieu advocated for toleration of religious belief and freedom of worship. Bolingbroke discounted the divinity of the scriptures and a religious basis of the law in his writings.

The Whig writer James Burgh, author of Political Disquietations and Crito, spoke out against religious establishments, warning of “a church getting too much power into her hands, and turning religion into a mere state engine.” In Crito, Burgh advocated for building “an impenetrable wall of separation between things sacred and civil.” Scholars believe this was likely the source for Jefferson’s letter to the Danbury Baptists, wherein he uses the same metaphor.

Barton’s writings have generated a great deal of criticism. After Falwell spoke his anti-separationist diatribe, Americans United for the Separation of Church and State refuted his arguments. “David Barton is the source of a lot of Christian nationalist disinformation,” said Andrew Seidel, a current vice president of Americans United.

Jefferson’s letter to the Baptist Association of Danbury appeared in the 1947 Supreme Court case Everson v. Board of Education, where justices ruled that the U.S. Constitution’s establishment clause applies to states. “The First Amendment has erected a wall between church and state,” the court opined. “That wall must be kept high and impregnable. We could not approve the slightest breach.”

The court’s interpretation has been the prevailing view among legal scholars, and has been supported by public opinion. According to an October 2021 Pew Research survey, 55% of Americans are “church-state separationists,” with an additional 18% exhibiting “mixed” views on the subject.Barton has been branded as a “fake historian,” and one of his books, “The Jefferson Lies: Exposing the Myths You’ve Always Believed About Thomas Jefferson,” was so widely criticized by reputable historians that its Christian publisher halted its publication in 2012 because the “basic truths just were not there.”