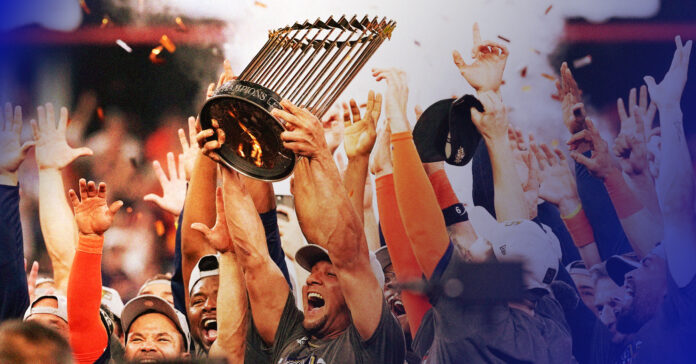 As the crowds poured through downtown Houston early Monday morning, it became clear that not only was this year’s championship parade going to be larger, but it would be even rowdier than the 2017 parade. Astros fans jubilantly celebrated the second title in the dynastic six-year run, making this year’s team the best in franchise history, and the best in MLB in that span.

Those in attendance seem to feel an immense sense of joy that the team finally had another title, putting the controversial previous title behind them. And they chanted “We Want Houston,” mocking the New York fans who chanted that same taunt during the ALCS sweep of the Yankees.

And one excited fan pointed out to a local TV affiliate that if you looked around the downtown crowd, it was reflective of the team’s diversity, a tremendous strength of both. The international city has a truly international team, and both exhibit hard-working never-say-die attitudes.

The team and their families, support staff, and front office personnel boarded numerous buses at Minute Maid Park headed for the parade vehicles that would carry them down the approximately 1.7-mile route. Confetti filled the air along Smith Street as the city celebrated its Astros as the parade started just after noon.

The Astros clinched the World Series with a 4-1 victory over the Philadelphia Phillies on Saturday night, and the citywide celebration began, culminating in the parade.

Local TV stations dropped their network feeds to broadcast the historic event after the City of Houston blocked off streets and closed schools to celebrate the team, and an estimated million or more people were jammed downtown for the 2022 World Series Championship parade. Despite the warmer-than-normal temperatures, the crowd’s energy never waned.

University marching bands led the procession, exciting the crowd full of anticipation of seeing their conquering heroes. Fans wore every manner of Astros team gear imaginable, some sporting homemade hats and many carried signs to celebrate the occasion, and the foreign-born players held aloft flags of their native nations.

National sports media wrote this weekend that the team’s dominance makes them one of the great teams in MLB history, drawing comparisons to the 90s New York Yankees and the 70s Cincinnati Reds’ “Big Red Machine.”

And the Astros bullpen had the lowest ERA in a World Series, with a mark of 0.83, with just five earned runs over 54 1/3 innings. To put that into perspective, the previous benchmark was 1.05, posted by the great 1973 Oakland Athletics.

Astros closer Ryan Pressly told MLB Network after completing his sixth postseason save that “Y’all don’t get to see how hard these guys work — this pitching staff, the bullpen — we come to the field every day trying to get better. We just want to get better at what we do, to perfect our craft. It’s finally paid off. All the hard work has finally paid off.”

The team has a strong sense of family, and it’s reflective of the culture instilled in them by Dusty Baker. He finally won his first World Series as a manager, 20 years after he first reached the Fall Classic in 2002 with the Giants.

“I’m so happy that it took this long because I would have been gone a long time ago, then you affect the players‘ lives and their families and that’s what it’s all about,” Baker said on air after the game.

The veterans of the team like Bregman and Verlander, as well as newcomers like the rookie Jeremy Pena, Trey Mancini, and Christian Vasquez, said that this team is more like a family than previous teams, and credited Dusty with leading them this season. And when Yordan Alvarez slammed his go-ahead three-run homer in the sixth inning, cameras panned to a smiling Baker raising his arms in celebration.

Coaches, players, and trainers all chanted “Dusty! Dusty! Dusty!” in the dugout before they joined the celebration of the field following the final out.

Throughout his amazing rookie season, Pena not only made Astros fans forget about his predecessor Carlos Correa, but he won the ALCS and WS MVP Awards.

He became the first rookie to hit safely in each of his first six World Series games and joined Marlins pitcher Livan Hernandez in 1997 as the only other rookie to be named MVP of an LCS and World Series in the same season.