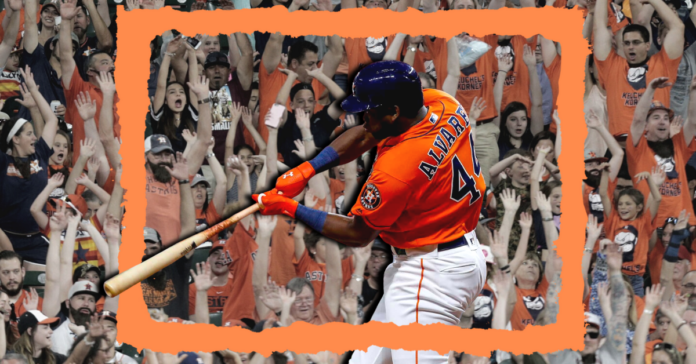 With his team one strike away from losing game one of their American League Divisional Series, Yordan Alvarez stood confidently in the batter’s box. But his team that won 106 games in the regular season had trailed all day. A sold-out Minute Maid Park crowd screamed at the top of its lungs in anticipation.

Seattle Mariners left-handed starting pitcher Robbie Ray, the 2021 AL Cy Young Award winner, peered in to see his catcher’s signals from the mound. He had just been brought into the game by his manager to face the all-star slugger Alvarez in the bottom of the ninth.

On the next pitch, Alvarez swung, and not only sent the ball on a 438-foot rocket blast to the upper deck, but he also put himself into all-time Astros lore and MLB history. The walk-off home run soared at incredible speed through the stadium air, and a jubilant Astros dugout emptied onto the field to celebrate, as the faithful crowd went wild over the game-winning hit.

The live crowd was so loud that many in the television audience reportedly never heard the sound of the bat hitting the ball, and thought perhaps Alvarez had struck out momentarily until TV cameras showed the flight of the ball headed to center field.

Then the citywide celebration was on, with many local bars and restaurants offering specials.

Not only was it perhaps the most important home run of his career thus far, but it finished up a 5 RBI day for the 25-year-old slugger. And it was particularly special for him as his parents made it from Cuba to watch him play.

The three-run homer capped an incredible comeback by the playoff-savvy Astros to win the game 8-7 eight to take a one-game lead in their best-of-five series.

And the home run wasn’t just another towering homer by the talented phenom, but a historic one, only the 2nd walk-off homerun in MLB postseason history by a team down to its final out.

The other — was Kirk Gibson’s unforgettable walk-off HR off Dennis Eckersley in Game 1 of the 1988 World Series, a play called by the late legendary Dodgers broadcaster Vin Scully, as famous a moment as exists in MLB playoff history.

The Astros had trailed all game long after staff ace Justin Verlander, the club’s Cy Young hopeful, struggled through four innings, and was relieved by reliever Bryan Abreu. The stunned crowd was also quieted by the timely hitting of the Mariners, and by their young 6’6” starting pitcher Logan Gilbert.

In addition to Alvarez, Alex Bregman hit a two-run homer in the bottom of the previous inning to bring the score to 7-5 with a shot to left center field. Jeremy Pena and Yuli Gurriel added a home run each to get the offense going in the earlier innings.

Postgame, many fans and analysts alike wondered why Mariners Manager Scott Servais would insert Ray into the lineup given his season-long struggle against the Astros. Also many pondered why Servais simply didn’t intentionally walk Alvarez.

But the Astros faithful were overjoyed to see Alvarez at the plate with the game and perhaps the series on the line, and he certainly did not disappoint.

Next up is Game 2 of the series today at 2:37 pm CT, which features Astros Framber Valdez on the mound. The game will be broadcast nationally on TBS.

Valdez set a MLB record for most quality starts in league history last month with 26. He will face off against the Mariner’s Luiz Castillo, a two-time all-star in his own right.

Given the Astros won game one, all they need is to win two of the next four games to claim the five game divisional series.

And two of those four games are at Minute Maid Park, including today’s game.

Historically, researchers have shown that home teams who have won Game 1 in the divisional round entered this postseason having won 70.7 percent of the series