Home Texas Legislature For Rural Texans, The Postal Service Is A Lifeline, But Some Say...
Facebook
Twitter
Email 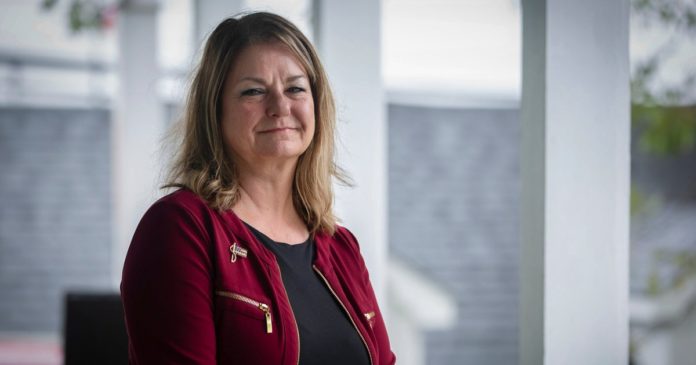 The problems with Denice Harlan’s mail didn’t start with COVID-19, the financial challenges of the United States Postal Service or the political tensions before a fiercely contested presidential election.

Yes, a check she was supposed to receive months ago got lost without ever reaching her office in Giddings, about 50 miles east of Austin. But her biggest concern is how delays have become more frequent and customer service has worsened in her rural town during the past several years.

“The postmaster used to be a local guy. You could go down to his house and tell him when something was wrong,” said Harlan, who is the CEO of the local chamber of commerce and works a block away from the post office.

Some of the local postal workers she knew have retired, and she thinks lost and late deliveries have become more common and more difficult to solve.

“I know people that don’t go to our local office because they are so afraid that they might get their mail lost,” she said.

In an election marked by the protracted COVID-19 pandemic when USPS could play a key role delivering mail-in ballots, the agency has experienced nationwide delays. But rural residents in Texas said that they are not as concerned about a potential impact on the election as they are about having regular, reliable service in the long term.

In rural areas where broadband internet connection is scarce, residents rely on the Postal Service to send checks, pay bills, get Social Security benefits and receive prescription medication. This is especially important for people ages 65 and older in the state, a group that represents 16.5% of the rural population and tends to trust physical mail for its needs.

According to data from the company SnailWorks, which tracks millions of commercial letters every day, there have been areas that have experienced delays during the summer, but it hasn’t become a statewide problem.

“We’ve seen overall statistically a half-day slowdown in first-class mail, which is not insignificant, but it is not the end of democracy,” said Dave Lewis, president of SnailWorks. “If you are unhappy with your service, you probably have been unhappy for a while. Things haven’t changed a lot. Places that had bad service probably still have bad service.”

Across rural Texas, business owners, community leaders and farmers told The Texas Tribune that the quality of USPS service varies from post office to post office. Most people haven’t experienced delays during the pandemic, others are happy with their local post offices and some, like Harlan, are worried about long-running decay of service.

The U.S. Postal Service declined an interview for this story, but a report presented by the agency to Congress late in August showed a minor increase in delays since March that intensified in July. Some of the delays have been linked by workers and Democratic politicians to cost-cutting efforts by Postmaster General Louis DeJoy, who banned overtime and removed some sorting machines.

President Donald Trump has incorrectly linked mail-in ballots with widespread fraud during this year’s presidential campaign. Despite these criticisms, Trump has encouraged voting by mail in Florida. In Texas, Republicans have fought mail-in voting expansions and attempts to increase mail ballot requests in court. According to an analysis by The Washington Post, Texas is one of only five states that still require an excuse beyond fear of COVID-19 for voters to ask for a mail-in ballot.

In Texas, anyone who is 65 years or older, cites a disability or an illness, is confined in jail but still eligible to vote, or will be out of their county during early voting and on Election Day can request a ballot by mail.

Last month, in San Antonio, U.S. Rep. Joaquin Castro confirmed the removal of machines after a visit to a regional distribution center, and workers later denounced that backlogged mail was hidden during the visit, according to the San Antonio Express-News. Since then, DeJoy has suspended his reforms until after the election and said in a Senate hearing that election mail will be delivered “fully and on time.”

“This will be a trial because it’s the first time the mail has become such a major issue during an election,” said Carlton Williams, president of the Texas Postal Workers Union, which represents 1,500 post office workers, most of them in small towns and rural areas.

His union has been critical of DeJoy’s measures and has endorsed Biden for president, but Williams believes there won’t be issues with mail-in voting.

In Leon County, a rural area north of College Station with a population of 15,000, County Judge Byron Ryder is not especially concerned about voters or election officials not receiving mail-in ballots on time due to the Postal Service delays he has seen for years. Most people in the area vote in person, he said.

“Whatever is happening now happened in the election before and the one before,” Ryder said. “This is not politically motivated. It’s a problem that has happened for the last four administrations. It’s a problem of inefficiency.”

And many other rural towns and counties haven’t seen delays. In Colorado City, west of Abilene, Earl Plagens just retired from being the publisher of the Colorado City Record, which delivers 2,200 newspapers a week.

“Our relationship with our post office is really good. We have no issues with the Postal Service, they are prompt and they do good service,” Plagens said. “Some of our subscribers in other parts of the state sometimes complain about not getting the paper on time. But as far as locally, our post office personnel are doing a great job.”

In Vega, a town west of Amarillo, Oldham County Chamber of Commerce and Agriculture director Jaci Roberson said that this community, and especially its restaurants, have taken a big hit because tourists have stopped visiting during the pandemic. But in the meantime, the Postal Service has remained reliable.

“We depend on our Postal Service, and we get taken care of by them,” Roberson said.

Tommy Engelke, executive vice president of the Texas Agricultural Cooperative Council, said that this is consistent across the state and that none of his members have complained about a decline of service.

“It’s not a coffee shop discussion in small-town America. If it is a problem, it’s not noticeable,” Engelke said.

He said he would have heard if service declined.

“When the post office goes away, in the same sense as when a school is closed, it disrupts lives,” Engelke said. “It’s an economic driver and a social institution. It’s much more than delivering mail.”

Another area where USPS plays a key role is in health care, by delivering prescription medications. According to the Texas Organization of Rural and Community Hospitals, on-time delivery hasn’t been a problem for the patients of more than 150 medical centers that it represents.

“Rural communities are at the end of the line with regards to the mail and most services, and they do rely disproportionately on mail prescriptions, but I haven’t heard any stories of actual delays so far,” said John Henderson, president of the Texas Organization of Rural and Community Hospitals.

While SnailWorks’ data shows a nationwide improvement in service during the last month, Ryder said customers will keep complaining because of the historical inefficiencies of the agency. For him, privatization is the only solution to the problem.

“You can see that people will complain and throw money and think they will solve it, but it won’t. They are the most inefficient office I know of,” Ryder said.

But postal worker leaders refute that private providers would help rural areas. According to them, serving less-populated counties is not always profitable for other providers.

“The Postal Service is grossly understaffed, especially in the rural areas that I represent,” Williams said. “This is a ploy to make the post office a public enemy and say that we are not doing what we are supposed to do. But in those areas back off the woods you are not going to get UPS or FedEx to deliver mail. That is not going to happen in rural America.”

In Giddings, Harlan said that most people, including herself, will vote in person despite the ongoing pandemic because that’s how they prefer to cast ballots. But she remains worried that a decline in service and the reputation of USPS will affect an agency that she considers essential for a town like hers.