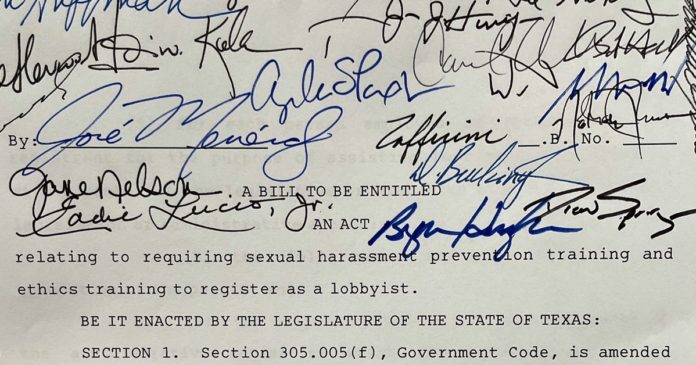 In the aftermath of the story that rocked the Capitol this weekend of a lobbyist using a date rape drug on a legislative staffer, the Legislature is starting to take action.

Sen. José Menéndez (D-San Antonio) filed a bill on Tuesday that would require lobbyists to under sexual harassment and ethics training before registering as a lobbyist.

The state senator tweeted, “This bill is replicated after the Texas Senate policy which requires completion of sexual harassment training every 2 years by Senators & all staff. If lobbyists are going to work in & around Capitol, & directly with our staff, they too should be held to a responsible standard.”

All 31 senators have signed on to SB 2233 as co-authors, and it is scheduled for a hearing in State Affairs on Thursday.

The Senate action is one of many steps the Legislature is calling for, and legislators say the problem goes much deeper. Rep. Ina Minjarez told The Texas Tribune, “There is still a culture of silence and covering things up.”

Speaker Dade Phelan has changed virtual sexual harassment training in the House to in-person, and Rep. Shelby Slawson (R-Stephenville) is not allowing lobbyists in her office until the matter is resolved.

Rep. Victoria Neave (D-Dallas) filed HB 21 last November that would allow an individual to file a sexual harassment complaint to the Texas Workforce Commission within 300 days of the incident. The bill was languishing in the Calendars Committee until yesterday when it was scheduled for the House floor on Thursday.

While the investigation is ongoing and legislators continue to take necessary action, changing the toxic culture at the Legislature will take more than a few bills.

Why Texas’ Laws Are Mostly Made By the Rich