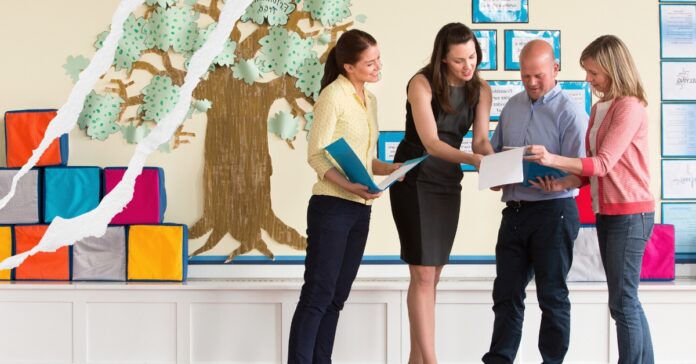 With a $32.7 billion surplus hanging over Texas Legislators, many Democrats are advocating for that money to go toward education. On Tuesday, Texas House Democrats revealed a proposal for a $15,000 pay raise for public school teachers.

According to a statement issued by TX HDC, the proposal would make Texas the 7th highest state in teacher pay and would help lower property taxes.

“Hoarding this surplus while educators and children are suffering is immoral, and it’s also bad business,” said Rep. James Talarico, who filed House Bill 1548, noting that education investment is valuable for the future of the state.

The proposal would utilize at least $20 billion of the tens of billions of unallocated funds available to the Legislature this session, as reported by San Antonio Express-News.

As the 88th Texas Legislature takes off, Gov. Greg Abbott has been quick to boast that per-student funding is at an all-time high and that he has been the most devoted governor in Texas history when it comes to funding public education and teacher pay raises.

If that is true, how come teacher salaries in Texas trail the national average by about $6,000, according to the most recent figures from the National Education Association labor union. In addition, teacher wages have essentially stagnated over the past decade when adjusted for inflation, according to a report released last April by the Texas American Federation of Teachers union and the left-leaning think tank Every Texan,

To substantiate his support for Texas teachers, Abbott always points to his 2019 school finance reforms that he passed in the 87th Legislature. These were billed as  “one of the biggest teacher pay raises” in Texas history. However, House Bill 3, only provided a short-term impact, and while a few teachers did get healthy raises, others didn’t even get enough to cover rising premiums for their district-sponsored health insurance.

Texas is facing a massive teacher exodus crisis, with many teachers feeling underpaid, underappreciated, and overworked. According to a Texas American Federation of Teachers members survey, 66% of Texas teachers wanted to abandon their profession last year.

In addition, Texas is currently $4,000 behind the national average in per-pupil spending, with a $6,160 basic allotment that has seen an increase since 2019, according to data from Raise Your Hand Texas.

So, when Abbott says stuff like “Texas is spending more on public education than ever before,” we can’t help but feel a little skeptical, especially if neither of the preliminary budgets specifies a dollar amount for the increased spending on public
schools.