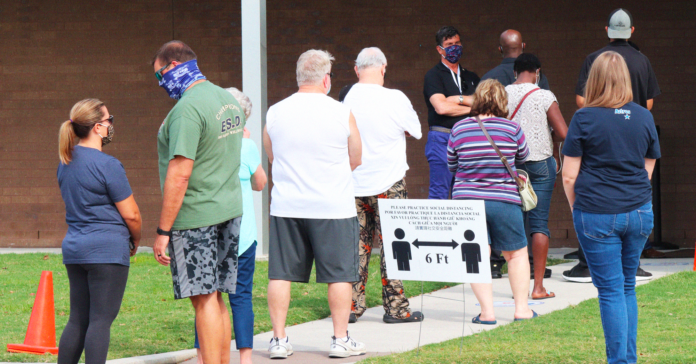 The Supreme Court of Texas has played a pivotal role, sometimes helpfully, but more often detrimentally, in the fight over Texans’ equal and safe access to the polls in the upcoming election. While many eyes have been trained on the United States Supreme Court over these past few months, the all-Republican Texas Supreme Court has been busily issuing opinions that directly impact Texans’ voting options during the pandemic.

Amid an onslaught of legal challenges filed by Texas Republican leaders in federal and state courts aimed at limiting voting options — the Texas Supreme Court has leaped head-on into the fray. Three key cases, two of which address access to mail-in voting, and one addressing drive-through voting, highlight the Texas Supreme Court’s role in this election.

In May, the court ruled that a lack of immunity to the coronavirus does not qualify Texans to apply for a mail-in-ballot. Siding with Texas Attorney General Ken Paxton, the court stated “we agree with the state that a voter’s lack of immunity to COVID-19, without more, is not a ‘disability’ as defined by the election code.”

In general, Texans are eligible to vote by mail only if they are at least 65 years old, have a disability or illness, will be out of the county during the election period, or are confined to jail. The Texas Election Code defines a disability as a “sickness or physical condition” which would prevent a voter from voting in person without a risk of “injuring the voter’s health.” The court stated, even while acknowledging that “there is much uncertainty about the disease,” that they believed it was “highly improbable” for overall voters to contract the virus.

Around that same period, Republican Lt. Gov. Dan Patrick claimed, without evidence, that efforts to expand mail-in voting during the pandemic were a “scam by Democrats to steal the election.” “There is no reason — capital N, capital O — no reason that anyone under 65 should be able to say I am afraid to go vote,” Patrick said in an interview with Fox News.

Subsequently, this October, the Texas Supreme Court dealt another blow to efforts to expand vote-by-mail access when they ruled that Harris County could not send mail ballot applications to its more than 2 million registered voters.

The all-Republican Court chose not to consider whether mail-in-voting was, in fact, a safer option and instead simply held that Texas law did not allow Harris County to mass mail ballot applications. “The question before us is not whether voting by mail is good policy or not, but what policy the [Texas] Legislature has enacted. It is purely a question of law,” the court said in its ruling.

“Once again, the all-Republican Texas Supreme Court steps into this election against the interests of voters and a functioning democracy,” said Texas Democratic Party Chair Gilberto Hinojosa.

“It is disappointing that the Court has sided with political forces seeking to limit voter access this November,” Harris County Clerk Chris Hollins said in a statement reported by the Texas Tribune after the ruling. “Placing limitations on nonpartisan outreach that educates citizens about their Constitutional right to vote should not be acceptable in a democracy.”

Texas is one of only five states not allowing widespread mail-in-voting for the current election.

Houston is considered a key stronghold for Democrats in Texas, who are particularly energized by their potential to win a majority of seats in the Texas House of Representatives for the first time in 20 years. Democrats need to take only nine seats to flip that chamber this November.

Finally, in a surprising but appreciated recent turn, the Supreme Court of Texas ruled this Thursday that Harris County voters may continue to cast ballots at drive-through voting centers around the county.

The court rejected a last-minute challenge from Texas Republicans, one of the many lawsuits filed in this state over elections and voting access. Although Harris County announced the program months ago, Texas Republicans waited until literally just hours before voting was set to begin to argue that drive-through voting was illegal. The court, however, rejected that argument.

There are currently 10 drive-through voting centers around Harris County, all of which are open to all voters.
This election cycle, four Republican Justices of the Texas Supreme Court are on the ballot.