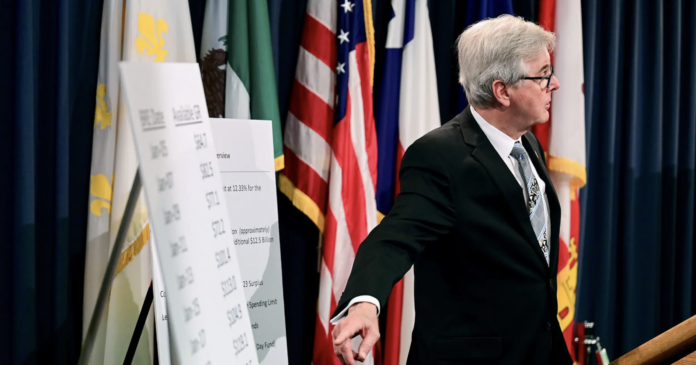 Lt. Gov. Dan Patrick on Wednesday unveiled a list of 21 legislative priorities including property tax relief, improving the reliability of the electric grid and continuing to spend money on border security funding.

Patrick, who presides over the Senate and wields tremendous power over legislation, also said he will focus on issues like boosting border security, law enforcement, state investment in mental health facilities, restoration of the Alamo, education, school security and tightening the state’s election laws.

But at the top of the priority list is addressing ballooning property taxes for homeowners. Patrick said lawmakers have an “extraordinary opportunity” to shape the future of Texas at the start of the next legislative session, which begins Jan. 10, because they’re expected to have a $27 billion budget surplus to spend on state projects.

Patrick said he would prioritize spending some of that surplus on property tax relief in the form of increasing the homestead exemptions for homeowners. In a break with Gov. Greg Abbott, Patrick said half of the surplus could not be used for property tax relief efforts — which was a promise Abbott made on the campaign trail this year — without breaking a constitutional spending cap set on Wednesday by the Legislative Budget Board, which Patrick co-chairs with House Speaker Dade Phelan. To address that, Patrick said state Sen. Charles Schwertner, R-Georgetown, would propose a bill this upcoming session that would allow lawmakers to save more money in the state’s rainy day fund.

Abbott did not respond to a request for comment.

Patrick said he wanted to spend the money wisely by putting it toward one-time expenditures that would not require ongoing funding because there is no guarantee that the state will have a surplus again. He also said he wanted to leave a “solid reserve” in the state’s coffers.

“We’re not going to spend all the money. You don’t know what’s ahead,” he said. “That would be foolish to spend every dollar.”

Texans pay among the highest property taxes in the nation because they are the primary funding mechanism for the state’s public schools and because Texas doesn’t have an income tax. The issue has been a staple of Patrick’s politics since he joined the Senate in 2007 and it fueled his rise to the most powerful post in the Legislature.

Patrick said he wants to raise the state’s homestead exemption, the chunk of a home’s value exempt from taxation, for the second time in two years from $40,000 to at least $60,000 — at a cost, he said, of about $2 billion.

When Texas voters in May elected to raise the homestead exemption from $25,000 to its current level of $40,000, the average homeowner with a property valued at $300,000 was projected to see about $176 in savings on their annual property tax bill — which is typically thousands of dollars.

Beyond homestead exemptions, Patrick said state lawmakers needed to provide a “robust property tax cut for everyone in this state” and floated the idea of a one-time payment to taxpayers, though he said such an idea is “a little difficult to do constitutionally.”

He said he was open to ideas from lawmakers, but he proposed cutting taxes by expanding the personal property exemption. Businesses have to pay taxes on “personal property” like furniture and equipment — which Patrick dubbed a “nuisance tax.” He called for legislators to expand the dollar amount exempt from taxation from its current limit of $2,500. He said the move would cost the state some revenue but “when you have this kind of money, you’ve got to give back to the taxpayer.”

Notably, Patrick said that more work needs to be done to fix the state’s power grid and he is making it a priority for the second legislative session in a row after a severe winter storm in February 2021 caused dayslong blackouts across the state and hundreds of Texans died during the crisis. He acknowledged that another serious weather event could knock out the grid again.

That position puts him at odds with Abbott, who asserted over the past months that the grid was fixed during the previous legislative session.

Specifically, Patrick called for lawmakers to pass legislation that would cause investors to build more natural gas plants in Texas, which he argues would prevent another power grid crisis.

The Electric Reliability Council of Texas and the PUC, which regulates electricity infrastructure, are still working to redesign Texas’ power market. A plan proposed this month aims to use financial rewards and punishments to incentivize more power generation to be available during times of very high power demand. During a Tuesday press conference, ERCOT CEO Pablo Vegas and PUC chair Peter Lake both emphasized that the changes would be “technologically agnostic” and would not prioritize one source of power generation over another.

But Patrick characterized the market redesign by regulators as a “long-range plan” and called for legislation that would cause additional natural-gas-fired power plants to be built in addition to the market changes. He called renewable sources of energy “a luxury.”

Last session, the Senate unsuccessfully sought to shift the financial burden of purchasing reserve power for the grid onto wind and solar producers. Patrick appeared to call for similar legislation, or another proposal that would give natural gas generators an edge over low-cost wind power. He said he couldn’t see himself leaving the session without a “guarantee” that more natural gas plants would be built in Texas.

“We have to level the playing field so that we attract investment in natural gas plants,” Patrick said. “We can’t leave here next spring unless we have a plan for more natural gas power.”

“If you can’t turn the lights on, you don’t have a Texas miracle,” Patrick said.

Patrick also said he plans to push to continue funding Abbott’s border security operation, which has cost the state more than $4 billion this biennium and has sent thousands of National Guard service members and Department of Public Safety troopers to the border. However, crossings at the Texas-Mexico border remain stubbornly high with the deployments showing little deterring effect.

Patrick also called for 10-year mandatory minimum sentence for people who use firearms in a crime and said he would push for changing state law to allow for voters to recall district prosecutors or move cases to other jurisdictions when locally elected officials won’t charge people with a crime that “doesn’t meet their standards.”

That was a shot at district attorneys and judges in urban, Democratic counties for charging decisions and bail amounts. Most notably, numerous counties have opted out of prosecuting people for low-level pot possession on first offenses, and the Dallas County district attorney has steered away from putting people into the system for low-level “theft of necessary items,” like food, diapers and baby formula.Mandatory minimums are rarely used in Texas, but they are controversial on a federal level, with opponents saying they don’t deter crime as intended but do lead to ballooning prison populations, often targeting people of color.

The proposal, if enacted, would be a major policy shift to increase incarceration in the state, which already imprisons the most people in the country.

Patrick, who spent several weeks of his recent reelection campaign on the road talking with rural Texans, said he also wanted to start a rural law enforcement fund to help boost pay for sheriffs and peace officers in those areas. He said he did not have a specific plan but could see the state giving ongoing funding to rural counties in amounts of $500,000 or $1 million to boost their law enforcement funding.

“The people in rural Texas deserve to be protected from crime just as people in the big city or the big counties,” he said.

On higher education, Patrick also floated support for a new endowment to support large public universities across the state besides the University of Texas System and Texas A&M University System, which have access to a multibillion-dollar endowment known as the Permanent University Fund.

For years, university leaders at universities such as Texas Tech University and the University of Houston have argued that the lack of access to PUF funds, which are assets that come from oil and gas revenues generated on 2.1 million acres of state land in West Texas, has negatively impacted their ability to advance in national rankings and stature.

Those calls grew louder after the University of Texas at Austin announced last summer its intention to leave the Big 12 Athletic Conference for the Southeastern Conference, a move that angered Tech fans who were worried about how UT’s departure might impact television contracts and access to conference championships. In the months after, Abbott voiced his support for a new $1 billion endowment for Texas Tech and one for the the University of Houston to help them advance academically, though he has stopped short of allowing these schools to directly access PUF funds. On Wednesday, Patrick said he supported a similar fund.

“We want all of our schools to be great,” Patrick said. “We need to help everyone,” adding that he thinks UT and Texas A&M could “pitch in and help us help those other schools,” though he did not elaborate on how.

Patrick also revisited his controversial push to “reform” tenure in higher education. In February, Patrick was more blunt, saying he would end tenure in public universities and colleges to combat the teaching of critical race theory. University administrators have said this would make it difficult to recruit and retain world-class faculty.

In K-12 schools, Patrick said he would prioritize increasing teacher pay, giving a “thirteenth check,” or a cost-of-living adjustment, to retired teachers and provide more school safety funding in the aftermath of school shootings. Most recently, a gunman killed 19 children and two teachers at an elementary school in Uvalde in May.

Patrick also said he would push for a “Parent’s Bill of Rights,” for which other elected officials like Abbott have also called. The proposals have been light on details, but generally, they are a response to conservative parents and activists who are concerned about public schools discussing race, gender and sex. The policy’s proponents promise to give parents more decision-making control over their child’s education.

Patrick also said the state needed to tighten its election laws again. One of his main priorities was to make illegal voting a felony again, after it was downgraded from a second-degree felony to a Class A misdemeanor in last year’s sweeping election legislation. The change happened during a flurry of lawmaking in the House, and Patrick and Abbott have called on lawmakers to reverse the change since last fall. Phelan said then that it was “not the time to re-litigate” the issue, but he could be swayed to make the change during the Legislature’s regularly scheduled meeting in January.

Patrick also said he’d push for the “timely counting of votes and review of machines” and singled out Harris County, the most populous county in the state. The county often has ballots that are several pages long, which make them more difficult to count and process, but it is a frequent target of Republicans because it is an urban and Democrat-run county.