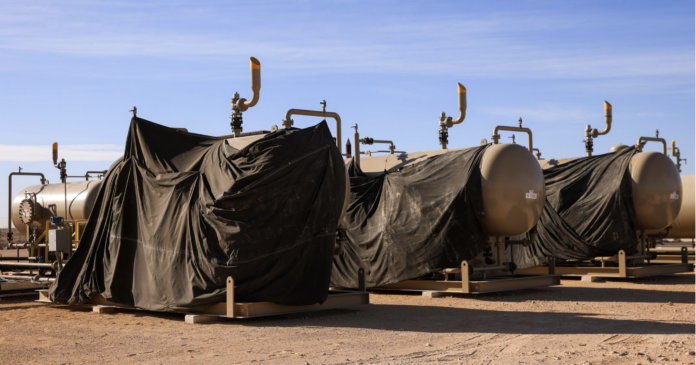 A year and a half after a severe winter storm nearly collapsed the state’s power grid, Texas oil and gas regulators approved new rules Tuesday that would require natural gas companies to properly prepare their equipment for extreme weather.

The rules will require oil and gas companies to be able to continue operating during a weather emergency, but they do not specify the standards the agency’s inspectors will use to measure readiness. They also require companies to submit annual reports to the Texas Railroad Commission, which regulates the state’s massive oil and gas sector, outlining what they have done to ensure their facilities won’t fail during weather emergencies.

If companies do not comply with the new rules, they would be subject to a $5,000 fine.

Critics are skeptical about whether the Railroad Commission can prevent another catastrophe like the one that struck Texas in February 2021, when extended freezing temperatures shut down natural gas facilities and power plants, which rely on each other to keep electricity flowing. The resulting blackouts left millions of Texans without power for days, and hundreds of people died in the winter storm.

A Federal Energy Regulatory Commission report on the Texas freeze released in late 2021 found that 87% of unplanned generation outages were due to fuel issues related to natural gas.

The Texas Competitive Power Advocates, which represents electricity generators, said the fine was not a strong punishment. “Penalties should serve as an incentive to avoid violations, not as a minor inconvenience,” the group said in comments submitted to the Railroad Commission.

Jim Wright, one of the three Railroad Commission board members, addressed those concerns during Tuesday’s meeting to adopt the new rules. He said “repeat and deliberate attempts to avoid compliance will not be taken lightly by the Commission and it will result in a referral to the attorney general.”

It’s unclear from the new rules what action the attorney general can take against companies beyond the $5,000 fine.

According to the weatherization proposal the commission adopted Tuesday, the new rules apply only to gas supply chain facility operators and gas pipeline facility operators that are included in a supply chain map the agency created this year to chart the state’s energy infrastructure, as mandated by lawmakers during the 2021 legislative session.

While the Railroad Commission took more than a year to implement weatherization standards, the Texas Public Utility Commission, which oversees the state’s power grid operator — the Electric Reliability Council of Texas —implemented rules last fall requiring power plants to fix “acute” issues exposed by the February 2021 disaster. Those rules were based on recommendations that were made — but never acted upon — a decade ago by experts and federal regulators after a 2011 winter storm caused widespread rolling power outages.

During Tuesday’s meeting, Luke Warford, a Democrat who is challenging Railroad Commission Chair Wayne Christian in the November election, slammed Christian and the Railroad Commission. The new rule “is beyond inadequate, failing to provide the accountability Texans deserve,” Warford told the board. “How can we possibly trust that this rule is going to keep us safe now?”

Neither Christian nor the other commissioners responded to Warford’s remarks during the public comments portion of the meeting.

Christian, who attended Tuesday’s meeting virtually because he said he tested positive for COVID-19, has mostly focused his reelection campaign on the state’s massive oil and gas sector’s importance to Texas and criticizing the Biden administration’s moves related to the industry.

Meanwhile, Warford has staked his campaign on last year’s power grid failure, trying to connect the catastrophe to the Railroad Commission and Christian’s leadership.

Disclosure: Texas Competitive Power Advocates has been a financial supporter of The Texas Tribune, a nonprofit, nonpartisan news organization that is funded in part by donations from members, foundations and corporate sponsors. Financial supporters play no role in the Tribune’s journalism. Find a complete list of them here.