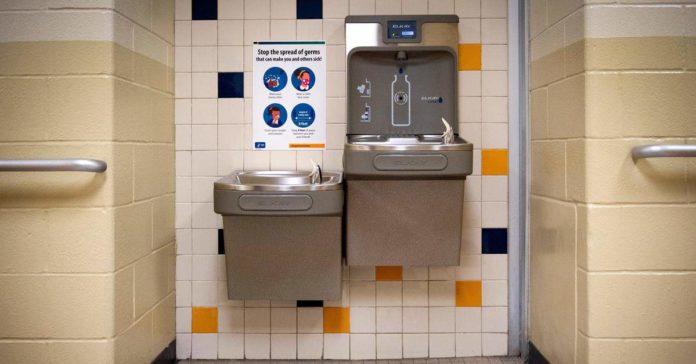 Texas will soon begin a program to test drinking water in thousands of elementary schools and child care facilities across the state following an update to federal standards on lead and copper exposure.

The change comes in the aftermath of the Flint, Michigan, water crisis that began in 2014. Michigan had switched the community’s water source to the Flint River but failed to properly treat the water to ensure it did not corrode the pipes. Lead and other contaminants leached into the predominantly Black community’s water supply as a result, a problem that went ignored for more than a year.

In one of the last actions by a Trump-led Environmental Protection Agency, the December update to the 1991 federal rule on reducing lead and copper in drinking water — which hadn’t been updated in decades — requires water utilities to test water at elementary schools and child care facilities. The rule also lowers the threshold for doing corrosion control treatments on pipes and replacing lines that contain lead.

In Texas, it will be the first time the state’s roughly 25,000 schools and child care facilities will undergo mandated water inspections for lead and copper — the state did not previously have any testing requirement. Young children are particularly vulnerable to the health effects of lead poisoning on the brain and nervous system, according to the EPA. Lead exposure in children is known to cause slowed growth, behavior and learning problems, difficulty hearing and lower IQs.

The Texas Commission on Environmental Quality, the state’s environmental agency, at times assisted school districts in testing water in the past, but only if the school district requested help, said Toby Baker, the agency’s executive director.

Now, the agency will be responsible for overseeing a plan to test tens of thousands of water systems that serve children throughout the state over the next three years.

That means Texas parents and guardians will get information on whether the water in their child’s school or care facility contains unsafe levels of lead. But it will take time and money to correct any problems discovered through testing — details the state is still working out.

“At this early stage, TCEQ is still evaluating the new requirements of this complex rule and has not fully determined yet how to implement the rule as revised,” said Gary Rasp, a spokesperson for the TCEQ. “TCEQ is not aware of any guidance provided by EPA to the states.”

To comply with the testing requirement, the TCEQ requested $8 million from the Legislature this session to create a program to test water in tens of thousands of schools and child care facilities and oversee corrective actions by water systems. The current Senate and House budgets proposed for the state include $7.1 million for the program.

The EPA rule requires community water systems to sample 20% of elementary schools and 20% of child care facilities per year — full implementation of the rule in Texas will be required by January 2024.

Baker said that if the Legislature cannot help finance the initiative, the agency will be forced to divert other resources to the effort since testing is required by the EPA.

“We feel this is an unfunded federal mandate,” Baker said. “We don’t disagree with the rule; we have needed this for a while. But, it’s quite an expensive undertaking for the state.”

Baker said in addition to requesting money from the Legislature, the agency will continue to ask the federal government to make funding available for testing. He said the TCEQ will need to create a new database, design a system for monitoring and hire new positions at the agency to carry out the mandate.

Testing water and correcting lead levels can be an expensive and time-intensive task, experts said, because the problem is so widespread and can occur from many different sources, particularly in complex facilities like schools. Lead usually enters drinking water through lead-based pipes or plumbing — which were used for decades before being banned in the 1980s.

“It is a legacy problem because there used to be a time when lead was not controlled as tightly as it is now,” said Gregory Korshin, a professor of civil and environmental engineering at the University of Washington. “Everything that was installed years ago is still there, and it’s very difficult to correct it.”

The EPA estimates that drinking water can make up 20% or more of a person’s total lead exposure. And identifying which component of a water system is the source of contamination can be difficult — and expensive.

“Every single case is different,” Korshin said. “The source of the lead might be quite unpredictable. It’s a very complicated issue to address.”

After the Flint water crisis gained national attention, at least 17 Texas school districts proactively tested drinking water for lead, according to data compiled by Environment Texas, an Austin-based nonprofit. Of the more than 1,000 schools in those districts, 13% found concentrations of lead above the federal threshold for corrective action.

Fort Worth Independent School District, for example, identified 60 schools with levels of lead above that threshold during its testing initiative in 2016. After testing, the school district was able to remove or replace sources of lead contamination, such as old-style water fountains, according to a press release at the time.

While scientists agree that no level of lead in the body is safe for children, EPA regulators countered that the systems with the highest concentrations should be prioritized.

Environmental groups maintain that the threshold for intervention is still too high. They also said Texas will need significant resources, money and stricter standards in order to prevent children from being exposed to lead.

Even among schools that voluntarily tested and corrected significant sources of lead exposure, many still have some level of lead in the water, said Luke Metzger, executive director of Environment Texas. He said the Legislature should set a lower standard for intervention.

“There are thousands of schools in the state that we don’t even have information on,” Metzger said. “The $7 million is a good start, but that probably won’t go as far as needed.”