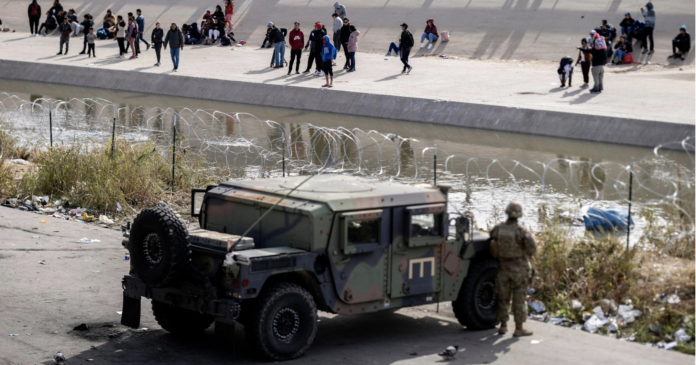 The U.S. Supreme Court ruled Tuesday to keep in place the emergency health order the federal government has used for more than two years to quickly turn away migrants, including those seeking asylum, at the southwest border.

The latest ruling replaces an order issued by Chief Justice John G. Roberts last week that halted the lifting of the health policy, known as Title 42, which the Biden administration had planned to wind down. Title 42 will remain in place for at least two more months. In its Tuesday order, the high court agreed to hear arguments in February on whether an Arizona-led coalition of 19 states, including Texas, can challenge a lower-court ruling that ordered the Biden administration to lift Title 42.

That lower-court ruling will remain blocked until the high court makes a decision on the more procedural issue of whether the GOP-led states can intervene in a lawsuit originally filed by immigrant advocates against the federal government.

The Tuesday ruling came down on a 5-4 vote, with Justice Neil Gorsuch joining the court’s three liberal justices in opposing the majority’s decision.

The Trump administration invoked the use of Title 42 in March 2020 as the COVID-19 pandemic began, calling it a necessary step to help stop the virus’s spread in immigrant detention centers. Dr. Anthony Fauci, the nation’s top infectious disease expert, has since said that immigrants are not driving up the number of COVID-19 cases.

“The Supreme Court has allowed Title 42 to remain in place temporarily while the case is ongoing, and we continue to challenge this horrific policy that has caused so much harm to asylum seekers and cannot plausibly be justified any longer as a public health measure,” said Lee Gelernt, the lead lawyer in the American Civil Liberties Union’s legal challenge to Title 42.

Immigration officials have used the health order more than 2 million times to expel migrants, some of whom have been removed multiple times after making repeated attempts to enter the U.S. Under Title 42, the recidivism rate — the percentage of people apprehended more than once by a Border Patrol agent — has increased from 7% to 27% since fiscal year 2019.

Ahead of the scheduled end of Title 42, thousands of migrants had either crossed the Rio Grande into Texas or were waiting to cross the border once the order was lifted.

As Texas border cities prepared for a possible increase in migrants crossing, they became the scenes of standoffs like the one last week in El Paso where National Guard members and state troopers formed a line on the banks of the Rio Grande and blocked dozens of migrants, who had already crossed the river from surrendering to nearby Border Patrol agents.

National Guard members directed men, women and children to official ports of entry, even though under Title 42 those ports remain closed to migrants seeking asylum.

With Title 42 remaining in place, El Paso’s Deputy City Manager Mario D’Agostino said Tuesday the city was preparing for the number of crossings to rise again after a “lull” over the holiday weekend, noting that there is a “large number of people” who have been awaiting the end of Title 42 just over the border in Ciudad Juárez.

“That’s why we continue to go forward with our planning because we anticipate those numbers will get back to what we saw maybe about 10 days ago,” D’Agostino said.

Last Tuesday, the Department of Homeland Security said agents had moved more than 3,400 migrants out of El Paso over the past week by expelling them to Mexico under Title 42 or flying them back to their home countries. Agents had also moved 6,000 migrants from the area to other sectors where immigration officials processed them.

The request from the coalition of states for the Supreme Court to weigh in came after Judge Emmet Sullivan of the U.S. District Court in Washington, D.C., ruled last month that the Centers for Disease Control and Prevention’s use of the order — which removes migrants from the U.S. without allowing them to access the asylum process — is “arbitrary and capricious” and a violation of the law because it was not implemented properly.

Sullivan ordered the Biden administration to immediately lift Title 42, then later agreed to give the federal government until Dec. 21 to prepare for the change.

Sullivan’s ruling stems from a lawsuit filed in January 2021 by the ACLU and two Texas-based immigrant rights groups that argued Title 42 violated U.S. asylum laws and that the Trump administration used the pandemic as a pretext to invoke Title 42 and use it as an immigration tool.

“Today, SCOTUS handed Texas and the USA a huge victory by allowing Title 42 to remain in place after Biden illegally tried to terminate this critical policy,” Texas Attorney General Ken Paxton said in a post on Twitter.

Another federal court also weighed in on Title 42 after Arizona and 18 other states filed a federal lawsuit on April 3 in Louisiana, asking a judge to stop the government from lifting Title 42. Texas filed a separate lawsuit on April 22 seeking the same thing, but dropped its lawsuit and joined the other states’ suit.

In May, U.S. District Judge Robert R. Summerhays blocked the Biden administration from ending Title 42. The administration appealed, and that case remains pending in the 5th U.S. Circuit Court of Appeals.