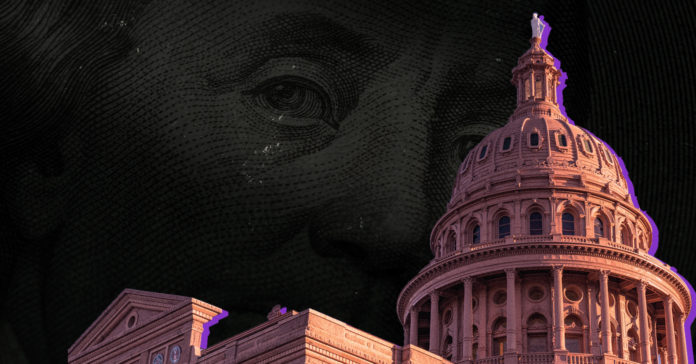 New campaign finance reports released this week by primary candidates for the Texas House show many of the hotly contested races remain competitive and some challengers to Republican incumbents getting a boost by conservative mega-donors.

These pre-primary reports cover the first 23 days of 2020, except for those candidates that participated in the January special election runoffs for whom the report begins on January 19.

By far, the most money spent in this period by a primary candidate was Cisco businessman Jon Francis in the open House District 60 race to replace Mike Lang (R-Granbury). Francis spent $345,000 in the first three weeks of January, a majority of which was on making voter contact through media buys, digital ads, mailers and blockwalking. He also happens to be the son-in-law of North Texas fracking billionaire Farris Wilks.

In the Republican primary, Francis faces Rick Perry-endorsed rancher Glenn Rogers. Rogers outraised him with $58,000, yet Francis retains the cash advantage by a factor of nearly four to one because of half a million dollars his in-laws gave him in December.

Several candidates raised six figures in campaign contributions in just the first 23 days of the year. They include businessman Bryan Slaton, who is challenging State Rep. Dan Flynn (R-Van) in the primary for House District 2 for the third consecutive time. Slaton raised $151,000 in the first three weeks of 2020 thanks to the help of two $75,000 checks from Farris Wilks and West Texas oilman and Empower Texans Chairman Tim Dunn. Both are behind the money of hardline conservative right. Incumbent Flynn only raised $50,000 and is lagging far behind in cash-on-hand, when comparing his $32,000 to Slaton’s $147,000. In the span of a month, this race has now become competitive.

Another six figure fundraiser in January is Jeff Cason, who is running in the open seat to replace Rep. Jonathan Stickland (R-Bedford) in House District 92. Cason raised $181,000, more than he raised in all of 2019. He was another beneficiary of Dunn and Wilks’ largesse. Each wrote a $75,000 check to Cason’s campaign while another Empower Texans donor, Darlene Pendery, wrote him a $25,000 check.

The third six figure fundraiser in January was former Brazosport ISD Trustee Troy Brimage, who is running in the open seat to replace Speaker Dennis Bonnen (R-Angleton) for House District 25. He was not helped by any mega donor but raised $193,000 through a combination of mostly four-figure contributions by individual donors and a plethora of in-kind contributions. There were 73 unique donors who gave an average of $2,000 in cash to Brimage’s campaign while another $45,000 was in-kind contributions by four dozen donors, some of whom also gave cash.

The five-way Republican primary in House District 25 was one of many races Reform Austin identified as being competitive based on last month’s campaign finance reports and the likelihood of heading to a runoff.  Here’s how the other races are shaping up:

The Republican primary race in House District 59 remains competitive. Previously, State Rep. J.D. Sheffield (R-Gatesville) outraised his opponents but was outspent by one challenger, businessman Cody Johnson, in part due to him self-financing his campaign to the tune of $115,000. This happened again where Sheffield outraised both of his primary opponents with $37,000, but Johnson loaned his own campaign $800,000. Johnson has built a war chest with $829,000 and spent $125,000, whereas Sheffield only spent $36,000 and maintains $92,000 in cash-on-hand. The other challenger, Shelby Lawson, raised $13,000, spent $15,000 and maintains $50,000.

The three-way Republican primary to challenge State Rep. Erin Zwiener (D-Driftwood) in the general election remains competitive. Similar amounts of contributions were raised by the two fundraising leaders, Carrie Isaac and Kent Wymore. While Isaac outspent Wymore $3,000 to $59.45, both maintain over $83,000 and will spend more as the primary nears.

In the five-way Republican primary to challenge State Rep. Vikki Goodwin (D-Austin), the race remains competitive. Attorney Jenny Forgey raised the most with $18,000. Meanwhile, former Austin city councilman Don Zimmerman spent the most with $41,000 to her $18,000. Nearing the primary, Zimmerman and Forgey maintain $53,000 and $62,000, respectively. The large number of candidates means there will likely be a May runoff.

In the four-way Democratic primary to replace Rep. Rick Miller (R-Sugar Land), the race remains competitive. Dr. Suleman Lalani and Rish Oberoi remain the fundraising leaders in the race with $9,000 and $5,000 raised respectively. Lalani outspent Oberoi with $17,000 to $10,000. Heading into the month of early voting, Lalani leads with $86,000 in cash-on-hand whereas Oberoi has $50,000. Both are expected to head into a runoff.

The four-way Democratic primary in House District 142 remains competitive. Previously, State Rep. Harold V. Dutton (D-Houston) was outraised by sitting Houston City Councilman Jerry Davis by $113,000 because Davis transferred funds from his City Council campaign account. In the latest finance report, Dutton outraised and outspent Davis. The incumbent raised $34,000 and spent $46,000, while Davis raised $16,000 and spent $22,000. However, Davis retains his cash-on-hand advantage with $109,000 in his war chest compared to Dutton’s $58,000.

In the Democratic primary to challenge the vulnerable State Rep. Matt Shaheen (R-Plano), Sharon Hirsch again outraised neurologist Aimee Garza Lopez with $11,000 to $2,000. However, Hirsch got outspent by $1,000 and maintains less than half the contributions as Lopez does. Lopez had loaned herself over $100,000 in 2019.

In the Democratic primary to challenge the vulnerable Chairman Jeff Leach (R-Plano), Tom Adair and Rocio Gosewehr Hernandez both raised $2,500. However, Adair outspent Hernandez 9 to 1 and has a cash advantage of $30,00 to her $9,000.