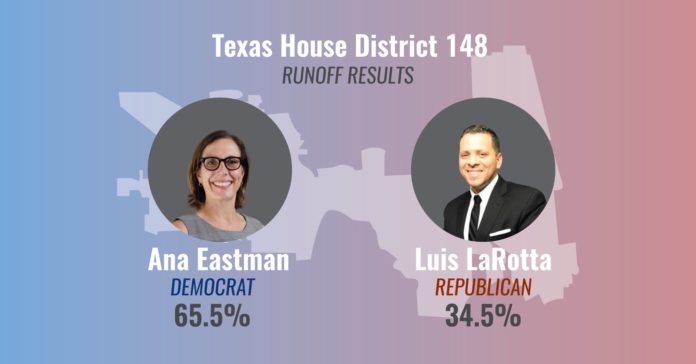 The special election was first called by Gov. Greg Abbott to replace Jessica Farrar (D-Houston) after she resigned last September.

Once Eastman is sworn in with the two other special election runoff winners in Fort Bend and Dallas, the House complement of members will be brought to 150, with 83 Republicans and 67 Democrats.

Eastman will be back on the ballot for the March 3 Democratic primary for House District 148. She will face Business Development Manager Emily Wolf, former 2019 Houston City Council candidate Cynthia Reyes-Revilla, former 2018 Harris County Commissioner candidate Court Penny Shaw, and paralegal Adrian Garcia, the latter two of whom ran in the first round of the special election. Whoever wins that primary will face Republican Luis LaRotta on November 3.