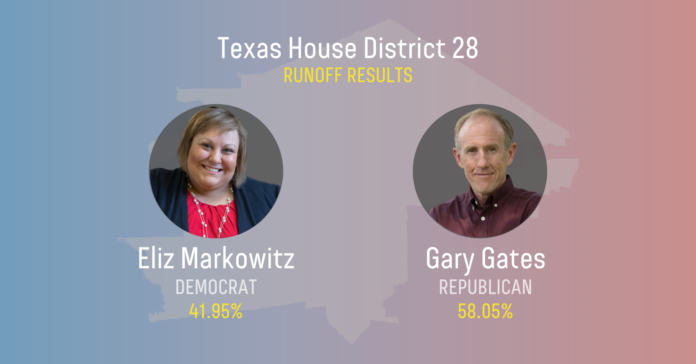 The special election was first called by Gov. Greg Abbott to replace John Zerwas (R-Richmond) after he resigned to take a position with the UT System.

House District 28 was identified as a second tier district by Texas Democrats in a recent memo on targeted districts flipping the House in 2020. Beto lost this district by only 3 points in 2018 whereas the incumbent Republican had won by 8.4 points.

Much attention was brought to the race as an early test of whether Democrats’ strategy to flip the House in 2020 will succeed. This led to hundreds of thousands of dollars in contributions, from both small donors and Democrat-aligned PACs, as well as independent spending by national groups supporting Markowitz. Yet despite a fundraising advantage, Gates’ ability to self-finance his campaign ensured Markowitz would be outspent.

According to a Reform Austin analysis of campaign finance reports released up until last week, Markowitz raised $728,000 and spent $539,000 while Gates raised $76,000 and spent $1.49 million, most of it loaned to himself, by the end of the Nov. general election and runoff.

Markowitz in a statement said, “We knew this election would be tough – it’s not easy to take on Republicans in an off-year special election, but we made this seat competitive in a way it’s never been before. We head into November having established a movement for change and that movement will continue across the state of Texas through November. This is a grassroots campaign dedicated to putting people over special interests, and we’ve built a network that will last for years to come.”

Gates told reporters the runoff results “shows on the Republican side, if we will get out and work hard and knock on these doors, that we can prevent many seats from flipping and maybe even take some back.”

Once Gates is sworn in with the two other special election runoff winners in Houston and Dallas, the House complement of members will be brought to 150, with 83 Republicans and 67 Democrats.

Markowitz as the only Democrat who filed for the March 3 primary will be on the ballot for House District 28 again on November 3. She will face whoever wins the March 3 Republican primary between now incumbent Gary Gates and vapor bar owner Michelle “Schell” Hammel.