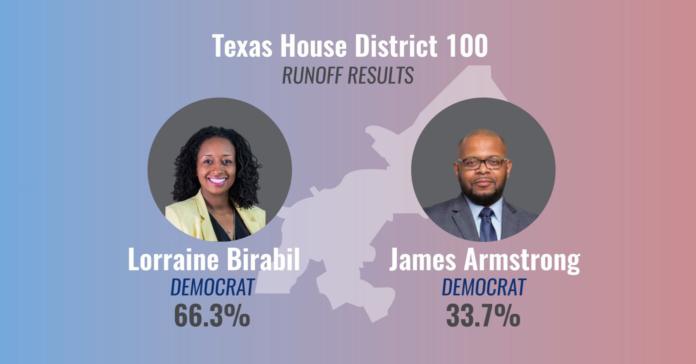 The special election was first called by Gov. Greg Abbott to replace former State Rep. Eric Johnson (D-Dallas) after he won the Dallas mayoral race last May.
Once Birabil is sworn in with the two other special election runoff winners in Fort Bend and Harris County, the House complement of members will be brought to 150, with 83 Republicans and 67 Democrats.

Birabil will be back on the ballot for the March 3 Democratic primary for House District 100. She will face James Armstrong III again in addition to attorney Jasmine Crockett, attorney Paul Stafford, Dallas business owner Daniel Clayton, former aide to Rep. Toni Rose, and former Dallas City Councilwoman Sandra Crenshaw, the latter two of whom ran in the first round of the special election. Whoever wins the March primary will automatically become State Rep., as there were only Democrats who filed.