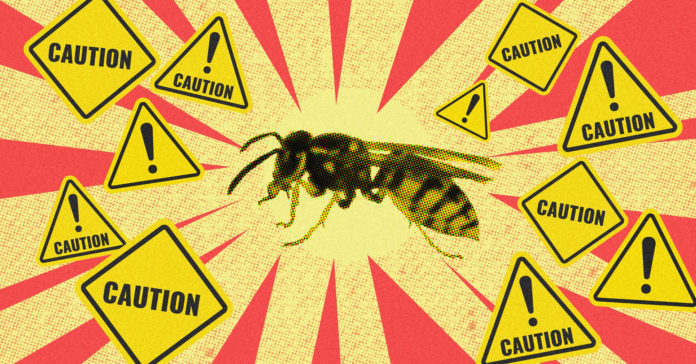 Since news of a possible invasion of the Asian giant hornet — also known as the “murder hornet” — circulated earlier this year, Texans have been on alert.

The Texas A&M Agrilife Research department, overseeing the task force established by Gov. Greg Abbott earlier this year, has gotten an overload of picture submissions daily from Texans wondering, what am I seeing? Is it a murder hornet? And if not, what is it?

The Texas A&M Agrilife Research experts and entomologists say there’s still no reason to worry about Asian giant hornets. Although their website gets eight to 10 pictures submitted a day, with local researchers handling more inquiries as well, no Asian giant hornets have been spotted in Texas.

What you’re probably seeing are cicada killers, the largest wasp humans will come across.

Late summer — especially in July and August — are the months when cicada killers come out in this region. According to the Texas Apiary Inspection Service, cicada killers are one of the largest wasps in the United States, and yes — they’ve been easily mistaken for Asian giant hornets because of their size, which can get up to one and a half inches.

The Texas Apiary Inspection Service — which works diligently to protect honeybee populations in Texas — says the cicada killers are actually considered beneficial insects since they prey on adult cicadas. Cicadas provide the familiar sounds of summer each night with their loud chirping. Although cicadas don’t sting, the way they lay their eggs can cause damage to trees and plants.

To help Texans in identifying what they are seeing, the Texas A&M Agrilife Center put together a video with detailed pictures of the different kinds of wasps.

There are a number of Texas native species of wasp, hornet, yellow jacket and bees, but what really separates the Asian giant hornet and a few of the state’s native species is their size, explain researchers TAMU entomologists Holly Davis and Pat Porter, who developed the video.

The ones most likely to be confused with Asian giant hornets are three species of cicada killers and the pigeon horntail.

If you see a cicada killer in your yard, their website offers insight into what an encounter might be like: people usually encounter the male cicada killer, which is stinger-less and therefore harmless. But, despite being harmless, the males may “buzz” or “divebomb” if you get too close because they are more interested in mating and protecting their mating opportunities, viewing a curious gardener as a threat. The females rarely sting and will only do so if handled.

If you come across a pigeon horntail, entomologists say there’s an easy way to spot them: horntails don’t have a waist, like the cicada killers and some other wasps.

But as with any wasp, bee, or hornet — keep an eye out; just don’t get too close.

Entomologists encourage Texans to continue to keep their eyes open and enjoy the newfound bug knowledge that accompanies being home more and seeing what’s going on in your yard. Dr. David Ragsdale, chief scientific officer and associate director of Texas A&M AgriLife Research and professor in the Department of Entomology, noted earlier this summer that local Texans may be the first to see different kinds of bugs as they hike in forests, or work in their yard or farms. Because of this, they are often the first line of defense against predators like the Asian giant hornet.

“Most everyone has seen the cicada killer wasp that is very large, but has mostly been ignored in the past,” Ragsdale said in a story with Texas A&M Agrilife. “With the most recent news of the Asian giant hornet, they are now paying attention to the native Texas insect.”