Home News Analysis America — Home to the Most Robust Democracy, or Simply the Most...
Facebook
Twitter
Email 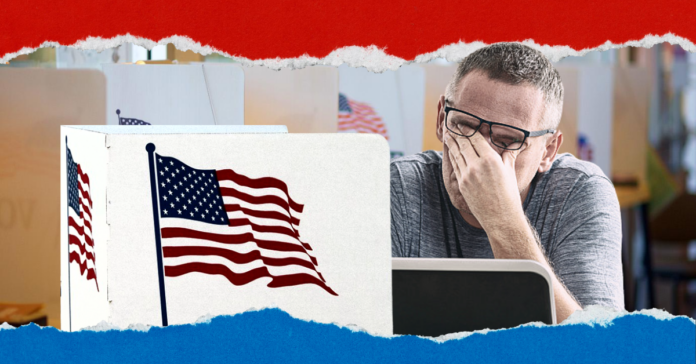 This election season, millions of bleary-eyed voters, motivated by various combinations of hope, fear, and outrage, stood in voting lines after being bombarded by TV and online ads increasingly in need of oversight.

Poll watchers and campaign advocates are becoming more outspoken and menacing at polling stations across the country. And it goes on — year after year, cycle after cycle, runoff after runoff.

Our political system, bloated by unprecedented campaign donations in the past decade, thrives on strife and division in the nation. And it seemingly consumes more of our time, energy, and money, leading to voter fatigue, despite the midterm enthusiasm exhibited this week.

This cycle alone, 435 House seats, 35 senate seats, and 36 gubernatorial offices were all on the ballot. Americans went to the polls to vote on their 30th or 40th race in just 4 years, according to the New York Times.

U.S. voters elected more than 500,000 officials across the country in virtually every election cycle, including judges and prosecutors, making us the only democracy to do so.

And in just another week, the 2024 presidential campaign will begin when former president Trump announces his re-election candidacy — which for many will seem like just another episode in a streaming series that never seems to end. And that announcement will come before some key 2022 races are even decided.

And then, after an exhausting year-long process, we finally send the winning candidates to D.C. or Austin — just to see them spend most of their time attacking the other party or fending off attacks, all at taxpayer expense.

Could voter fatigue, brought on by all the money and conflict in our politics, be the real reason voter turnout is nearly always a fraction of the total number of eligible voters?

The Times quoted statistics showing that turnout for local elections often falls short of 25 percent, sometimes as low as 15 percent.

Then there’s the obscene sum of money — just this cycle, $9 billion has been spent by campaigns — twice as much as in 2002. Some 90 percent of the U.S. House of Representatives are won by the campaign that spent the most money, according to FiveThirtyEight.

According to a report in Business Insider, taken together, $16.7 billion was spent by the candidates, party committees, political action committees, super PACs, and other organizations advocating for or against candidates or ballot measures. This data was collected by the nonpartisan research organization OpenSecrets projects.

Yet, according to a Pew Research Center 2022 turnout has not kept pace to justify the grotesque amount spent. Their recent report indicates that the money spent on political ads has little impact on how Americans vote, seeming to show money spent on ads does not result in a given candidate getting the required number of votes.

And in Texas, one of 11 states with no contribution limits, campaigns have raised an enormous amount of money this cycle, with an estimated $260 million, the sixth most money spent in the U.S. States.

According to Inc. magazine, PACs and special interest groups spent big in Arizona, where the Senate race numbers were already over $116 million, and North Carolina totals exceeded $160 million. And in Illinois, two billionaires, the governor and a hedge fund manager, spent more than $100 million to buy ads for or against a state tax proposal.

And with Americans still struggling with inflation, access to health care, and education costs, is this the best use of the wealth of a nation in recovery from the economic ravages of a global pandemic and food insecurity?

Is it any wonder that congressional legislative output is so impotent when every House of Representatives seat is up for grabs every two years, and one-third of the Senate is up for reelection every two years? How much work can get done in an environment where the vast majority of activity revolves around fundraising and stump speeches?

But whether voters are suffering fatigue or burnout, American voters are likely concerned about the results, given the 2020 election interference and fraud are still being argued in federal and state court cases. And many of the election deniers are running for office nationwide.

But after this cycle, perhaps it’s time to take a look at ourselves in the mirror and ask one simple question — is this the democracy we want, or is it simply what we let happen to it?

The 5-4 Supreme Court ruling in the 2010 Citizens United case was the death knell to the idea of campaign limits as set in motion in 1974 when the Federal Elections Commission (FEC). The FEC was created to act as a watchdog on political spending.

“In our 35 years of following the money, we’ve never seen a court decision transform the campaign finance system as drastically as Citizens United,” said Sheila Krumholz, executive director of the Center for Responsive Politics.

“We have a decade of evidence, demonstrated by nearly one billion dark money dollars, that the Supreme Court got it wrong when they said political spending from independent groups would be coupled with necessary disclosure,” she added.