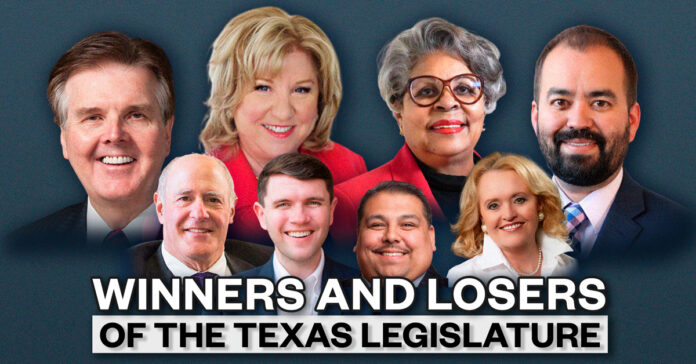 Updated Wednesday at 5pm with retirement announcements by Sen. Kel Seliger and a decision not to run in House District 77 by state Rep. Claudia Ordaz Perez.

The Texas Legislature just ended their third overtime session of 2021 – perhaps the busiest so far –  appropriating $13.3 billion of American Rescue Plan Act (ARPA) funds for Texas, while leaving $3 billion to use during the next session for some kind of property tax relief. They also drew new political boundaries for the Texas House, Senate, State Board of Education and Texas’ 38 Congressional Districts. Here at RA News, we take a look at the winners and losers of the third special session.

Why: In the party where Donald Trump owns the circus, Dan Patrick again proved to be his ringmaster. Patrick successfully pressured Gov. Abbott into adding items to the special session and was able to redirect $3 billion of ARPA money for future property tax relief. He dominated redistricting by drawing favorable maps for his faithful follower, Pete Flores in SD-24, and punished adversaries. He drew Democrat Beverly Powell into a strongly Republican SD-10 and vulnerable Republican Kel Seliger into a deeply conservative SD-31. Patrick then got Trump to endorse a slew of his favored candidates, including Seliger opponent Kevin Sparks.

Why: For what could be her last session as Senate Finance Chair, Nelson deftly led the appropriation of billions of ARPA funds without much pushback. Nearly all Senate floor amendments were withdrawn and most of her bill survived negotiations between the two chambers.

Why: The two redistricting chairs gave themselves safer districts in this year’s process, but also drew strong GOP majorities in each chamber. They kept their cool during debate, and used carefully lawyered language in their responses to limit legal exposure in future litigation.

Why: The longest-serving member of the Texas House from Houston was able to get Republicans to compromise on Congressional maps for one of her amendments. She returned communities of interest and the residence of incumbent Rep. Sheila Jackson Lee back to Texas’ Congressional District 18 after it had previously been split into TX-9 and TX-29.

Why: The Dallas state Rep. and Chair of the Mexican American Legislative Caucus (MALC) made a strong case against Republican-drawn maps for diluting Hispanic voting strength, reducing Hispanic majority minority districts, and violating the VRA, all of which will certainly come out in future litigation.

Why: The former Speaker Pro-Tem was able to bring parts of Ft. Bliss and all of El Paso International Airport into El Paso-anchored districts TX-16 and HD-079.  Will his penchant for deal-making get him back the Pro-Tem position?

Why: They were completely steamrolled by their GOP counterparts in redistricting, and they were unable to stop the GOP from targeting trangender youth.

Why: The South Texas Democrat was perhaps the biggest individual loser in redistricting. He was drawn into a safe Republican seat (Trump +24.9), Texas House District 31. Perhaps that explains why he was absent the day the Texas House voted on their own map.

Why: Despite a great deal of protest regarding the splitting and diluting of what had been a minority-coalition district, the moderate Burleson Democrat was drawn into a safe Republican district (Trump +14.8) from what used to be a Democrat-leaning district (Biden +7.7) in Senate District 10.

Why: The sophomore rising star of the Texas Democratic Party was drawn into Republican-leaning Texas House District 52 (Trump +4.7) from a swing seat favoring Democrats. Talarico announced he’s moving into Travis County, claiming he has been “gerrymandered out”, and is now running in a safe Democrat open seat. It appears he’s willing to take a tough primary challenge, but not a tough general election one.

Why: The two El Paso Latina State Reps. were the only true pairing of incumbents in a single district, House District 77, in the final Texas House map, forcing one of them to make the difficult choice of retiring. On Wednesday, Rep. Ordaz Perez said she would not run for HD-77 but will make a decision about running in HD-79, currently held by state Rep. Art Fierro (D-El Paso), by next week.

Why: The Bexar County moderate — often the sole vote against radical legislation — was rewarded with a more conservative district. Facing an immediate primary and claiming he is following his term-limit pledge, Larson announced he would not be returning to the House.

Why: Betrayed by fellow Tarrant County Republicans, the freshman from Bedford was drawn into a safe Democratic Texas House district (Biden +24). Even when he proposed an amendment that would make his seat safer while making the neighboring House District 93, an open seat left by Rep. Matt Krause (a Democrat pickup), his colleagues decried that communities of interest were being split up, an irony that Cason and state Rep. Jasmine Crockett (D-Dallas) acknowledged.

Why: The former Amarillo mayor, who has frequently caught the ire of Dan Patrick over the last few sessions, was rewarded by being drawn into a far more conservative district (Trump +78). The new Senate District 31 removes some counties in the Panhandle and add some counties around Midland. This made the district more favorable for his primary opponent, Kevin Sparks, former TPPF board member and Midland oilman, who was endorsed by Trump at the urging of Patrick. On Wednesday, Seliger announced he would not seek re-election in 2022.

Why: Trump paid an unusually inordinate amount of attention to this special session. It has been reported that much of Trump’s attention was at the urging of Dan Patrick. However, despite his letters to Greg Abbott and Dade Phelan, both the election audit bill, which was not put on the call, and the increased offense of illegal voting died in the Texas House.

Looking at what happend and did not happen this special session also affects not just politicians, but the rest of Texans who are on the hook for $1 million everytime the Legislature goes into overtime and the intended and unintended consequences of their policymaking.

Why: Nothing was done to fix the natural gas weatherization loophole the Texas Legislature wrote into law, but State Senators acted like memory-challenged goldfish and rebuked Railroad Commission staff in committee for following the law as they, themselves, had written it. To date, the Railroad Commission has not proposed new rules to close the loophole.