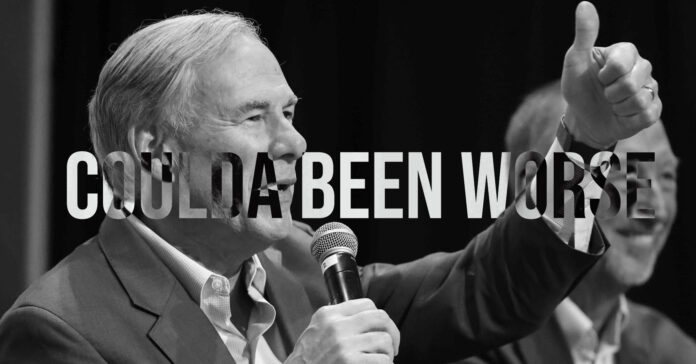 In early September, an unknown group purchased a $6.1 million statewide television campaign in Texas blasting Gov. Greg Abbott for a slew of issues as he campaigns for re-election this November.

This week, the mysterious group expanded their campaign to include an attack, in both English and Spanish, to include both Lt. Gov. Dan Patrick and Attorney General Ken Paxton on the topic of abortion. In the new ad, the narrator intones over ominous music: “Three men. Inordinate power. A governor. His lieutenant. Their lawyer.”

“Three men,” the narrator continues, “said women in Texas have no right to control their bodies. No freedom to decide. Three men supported a rapist getting ten years, while the woman he raped, gets marred for life.”

“Three men believe a young daughter must carry her father’s baby,” while the words, “no options for incest” move across the screen, superimposed over images of Abbott, Patrick and Paxton.

The group is known as It Coulda Been Worse LLC, which references the comment Gov. Abbott made at a press conference after the Uvalde shooting. It’s unclear who is behind this group, as Texas does not require financial disclosure of dark money groups. Democratic nominee for Governor Beto O’Rourke has denied knowledge of the group and has called for them to voluntarily disclose their donors. Purchase orders for the broadcast and cable ad campaign filed with the FCC show the group is based in Alexandria, VA and has Michael Waters as its executive director.

In the initial ad against Abbott, the minute-long narration suggests Abbott is the cause for disastrous events in the past four years including mass shootings, citing the 2018 Santa Fe, 2019 El Paso and 2022 Uvalde shootings, the failed law enforcement repsonse to Uvalde, deaths from “power grid mismanagement, …billions lost [from border shutdown for DPS inspections]… cratering of education,… ban on abortions…women’s freedoms taken away… [and] property taxes crushing homeowners.”

Gun sales have spiked in the last few years. Abbott has not prioritized or passed any restrictions for AR-15s or other firearms in the last two legislative sessions. Rather, he has eased restrictions of firearm sales during a disaster, firearm storage in hotels, and license requirements to carry firearms in public spaces.

It is legal in the state of Texas for an 18 year old to buy an AR-15 or any other kind of long gun. This has been the subject of calls for reform by the families of survivors and victims of the shooting at Robb Elementary School in Uvalde, Texas. The shooter was an 18 year old who purchased an AR-15 shortly after his 18th birthday. Gov. Abbott has refused to call a special session to raise the age to purchase an AR-15 or assault weapons and recently claimed it has already been ruled unconstitutional by the courts (they haven’t).

Following the Santa Fe shooting, Gov. Abbott conducted roundtables, published reports, and prioritized school safety and mental health reform. He signed into law a slew of school safety laws in 2019, but none to restrict access to guns.

Following the El Paso shooting, Abbott responded with roundtables, several executive orders, promises of reform and legislative changes from his Texas Safety Commission, but followed through with none of them during the 2021 legislative session. The only bill that was signed into law by Abbott allows state and local enforcement to charge someone for lying on a firearm background check, already a federal crime and one committed by the El Paso shooter.

Following the Uvalde shooting, Abbott made few promises of legislative change, passed the buck on what, if any, change would entail to state lawmakers, and refused to call a special session.

A Texas House Investigative Committee report showed 376 members of law enforcement responded to the Uvalde shooting and found there were systemic failures and a lack of leadership that led to a delayed response that may or may not have cost lives.

“Many died from power grid mismanagement”

Recent polling suggests that, while Paxton may be vulnerable, both Abbott and Patrick have consistent leads over their Democratic challengers.